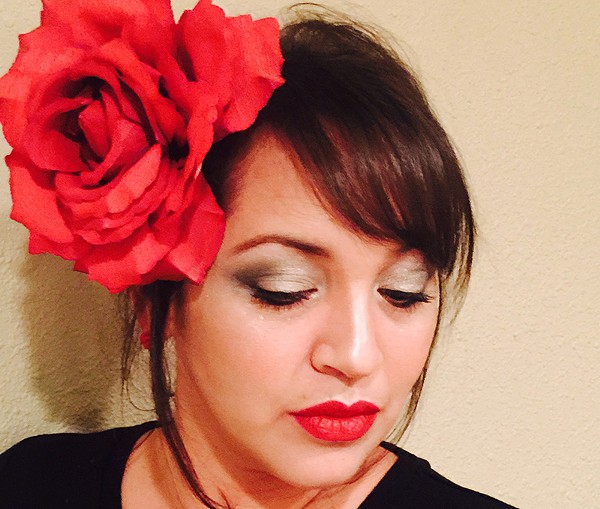 Laurie Ann Guerrero, current San Antonio Poet Laureate and 2016 Poet Laureate of Texas, is a badass of poetic proportions: a poetess, a mother of three, a teacher, a community advocate for literacy and a feminist.

She married right out of high school, had kiddos, struggled to balance life and learning, and, all the while, her determination to pursue her writing only grew. Now, still only 37, she's got a Bachelor of Arts from Smith College, an MFA in Poetry from Drew University and has published three excruciatingly exquisite books of poetry. She's recently been named literary arts director at the Guadalupe Cultural Arts Center.

She's one hell of a nieta too, but we'll get to that.

Guerrero, a name which quite aptly translates to "warrior" in English, is San Anto born and raised. It was in Harlandale schools and in her South Side home that the fire to create and record her personal history was kindled. A graduate of McCollum High School, where she was recognized as a singular talent by a devoted English teacher, Guerrero finished school with hard-won and formative experiences at Duke and Lewis and Clark University writing workshops under her belt. Already a published poet, Guerrero also had some strong influences in Sylvia Plath and, for her cultural relatability and her empowering voice, Sandra Cisneros.

In a recent sit down with the San Antonio Current, at Joey's on St. Mary's of all places, Guerrero commented on Plath's influence:

Of Cisneros, Guerrero said, "She showed me that stories like mine and families like mine belong in literature." And she's hoping that her own work, and the profile afforded by her laureate appointments, can have the same effect on young Tejanas today.

Her latest effort, A Crown for Gumecindo (Aztlán Libre Press), from which she will be reading this Sunday as part of the Guadalupe's Día de los Muertos celebration, is about an even bigger influence for Guerrero — her abuelo Gumecindo Martínez Guerrero, a man she describes as "the first and greatest poet [she] ever met."

A carpenter and all-around handyman by trade, Gumecindo worked his poetry with his hands and through the stories he took the time to share with his granddaughter He called Guerrero his "right-hand man" as opposed to mija and was always quick to encourage her curiosity and her writing. As such, A Crown for Gumecindo, begun a few months after his death in 2013, can be seen as a lament and a celebration at once. The following excerpted lines, serve to show both the raw, innocent hurt and the mystical metaphors of overcoming that are hallmarks of the collection.

"One hot day in July, my king, you were gone–

wheeled out under the red and early sky.

Until you find me, I build a house: carve

boulders with your chisel, sweep fire and air

aside with sage, dig tunnels with my hands."

– from A Crown for Gumecindo, "13. The Work: Blueprints for the Body"

In form, the collection is a heroic crown of sonnets: an intricate, meticulous set of 15 interwoven sonnets, where the final sonnet is comprised entirely of the first lines of the previous 14. It's an old form, the sonnet, and one that Guerrero previously felt repelled and marginalized by, due to its Anglocentric and male-centric connotations.

But, in an act of reclaiming, of re-colonizing, Guerrero came to see the sonnet as a vessel, as a place to build. She knew that she had to keep moving, or risk being overcome by her sadness. If the sonnet is like a room, Guerrero knew that she should be the one to take her history, to take her Gumecindo into that room. Thus, she settled in and channeled her pain and genius, in equal measure, into this heartbreaking and gorgeous deconstruction of grief.

She explained: "I couldn't function for shit ... I mean he was my rock. I was paralyzed, thinking 'What am I going to do?' And then I thought, 'What would he do?' You go to work. We are a working family. When I lost him, I had to gather all of my resources and use what was accessible to get the work done, just like he always did. So what are my resources? My education. The sonnet."