Ginsberg, Kerouac and Burroughs get schooled in 'Kill Your Darlings' 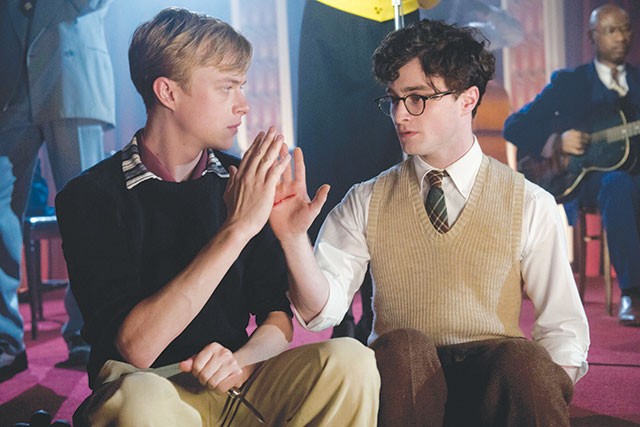 Director John Krokidas and his screenwriting partner Austin Bunn make a savvy choice in their decision to bring the story of Allen Ginsberg, Jack Kerouac and William S. Burroughs to the screen. Understanding that an appreciation and knowledge of the Beats can be self-limiting in terms of box office (such recent efforts as On the Road and Howl struggled to find audience), they have not only assembled an impressive roster of young actors—led by Daniel Radcliffe—but have focused the narrative on a little-known true-crime drama that occured before these alternative literary heroes had ever written a word. It’s the story of the Beats before the Beats, and so requires no particular knowledge of their work.

We meet Ginsberg (Radcliffe) as a shy New Jersey kid desperate to escape the tense claustrophobia of a home held hostage by his mentally unstable mother (Jennifer Jason Leigh). Accepted to Columbia University, he leaves as a starry-eyed freshman with dreams of becoming a writer. There, he quickly becomes enamored with Lucien Carr (Dane DeHaan), a charismatic and showy provocateur whose friends include William Burroughs (Ben Foster) and Jack Kerouac (Boardwalk Empire’s Jack Huston). A self-professed rebel and lover of William Butler Yeats, Carr becomes the ringleader for the students’ anti-establishment revolution against the Ivy League school’s stodgy view of society and education. He is also the unhealthy obsession of David Kammerer (Michael C. Hall), a former professor and lover.

Jazz, alcohol, drugs and, of course, homosexual tensions electrify Ginsberg’s newfound independence as he’s pulled into philosophical debates, quote duels and rebellious acts against the university. This last bit provides Krokidas with his best set piece: the theft of a key and the sabotage of the library’s display cases, which he stages as a crackerjack heist sequence.

But these catty would-be burglars aren’t near as charming as the Ocean’s 11 crew. The smug narcissism of the characters would almost be too much to bear if it didn’t ring so true. These are icons in their formative years, wrestling with inspiration and liberation, but not yet in possession of the tools that will hone their artistic expression.

Of course, at the heart of everything, is the gay love triangle that forms between naive Ginsberg, jealous Kammerer and Carr, with his unrequited affections. It all comes to a head in a fit of frustrated rage that leaves Kammerer dead. This becomes the dramatic core of Kill Your Darlings’ unfocused narrative, one that is unfortunately given away in the film’s opening moments.

Strangely, the murder also incites Krokidas to overplay his otherwise clever, if at times emphatic, direction. Pushed to heights of self-conscious audacity, he composes Kammerer’s death as a metaphorical kaleidoscope centered on penetration. Ginsberg has gay sex for the first time, Burroughs shoots up and Kammerer is stabbed again and again. It’s all a bit purple.

On the other hand, Krokidas proves himself a cunningly inventive filmmaker, making a shoestring production look 10 times its budget. The period flourishes, vintage energy, well-chosen locations and jazzy pace all come beautifully together, with Nico Muhly’s contemporary score and typewriter key rhythms polishing the rough spots to a high sheen.

Krokidas’ ensemble—which also includes David Cross, Elizabeth Olsen and John Cullum in bit parts, is top-notch. Radcliffe and DeHaan have palpable chemistry, with the latter’s charisma recalling the shine of early-career Leonardo DiCaprio, and Foster is a blast as the dry but twitchy Burroughs. There isn’t a flat performance in the bunch.

What Kill Your Darlings misses, however, is the opportunity to better fold in the real-life events that took place during and after Kammerer’s murder. Kerouac and Burroughs, present at the time and arrested as accessories, would eventually collaborate on a novel chronicling the incident, called And The Hippos Were Boiled in Their Tanks.

Their account wasn’t published until 2008, 63 years after the event. Exploring how the killing impacted their relationship, ended their innocence and activated their work might have provided a stronger contextual frame for a film that struggles to craft more than an intriguing footnote to these writers’ celebrated careers.