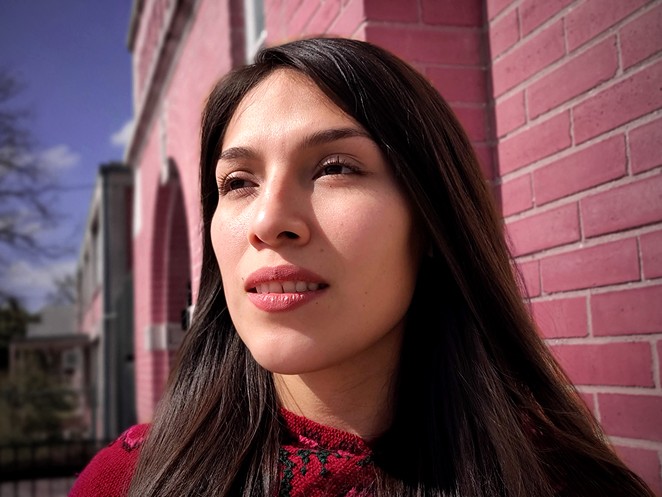 Progressive Teri Castillo is facing 10 other candidates in the crowded race to represent San Antonio’s vibrant, though economically hard-hit, West Side on city council.

As we chat via Zoom, Castillo, 29, tells me what it was like growing up in her neighborhood — the setting for stories she grew up hearing about how her grandparents first met. A picture of the couple hangs on the wall behind her, next to an art piece that reads “Support Biz in the Hood.”

During her childhood, her parents owned and operated an ice cream truck. And helping run that particular biz in the hood helped her hone her math skills.
“We always had the best nachos,” she recalls. “We would fill the nachos to the brim and weren’t cheap with the cheese. We hooked it up.”

She says it felt good to see so many customers happy to see the truck arrive. “But when we’d run out of cucumbers or cheese it was, like, ‘Oh, man,’” she adds with a chuckle.

I tell her that’s an appropriate analogy for holding public office. If she’s elected to council, sometimes she’d make people happy, but sometimes she’d have to tell the people of District 5, “Hey, we’re out of cheese.”

She laughs. “That’s a great analogy. I think that’s why transparency is important, right? If we run out of cheese, is it because we didn’t bring enough on the truck to reheat? Is it because we brought all we had, and we ran out? It’s important to have that communication, transparency and dialogue with constituents [about] why something is stalling or why it fell short.”

The one-time ice cream truck helper is now a historian of urban policy.
“Oftentimes, we learn from history. But what we see is a lot of policy being refashioned,” she explains. “We’re seeing the perpetuation of inequalities because of the refashioning of policy that needs to be addressed and changed, especially when it comes to housing and the shaping and creation of cities.”

Through a series of op-ed pieces in the Express-News, Castillo has tackled such subjects as the criminalization of poverty and the demolition of homes in Brown and Black neighborhoods and how this practice affects the people of District 5.

“When we look at the homeowners of these homes that are slated for demolition, there are a lot of folks who work in our service industry and [are] front line workers,” she says. “Not only are they losing the value of their home because it’s going to be demolished, they are also left with a bill for demolition.”

Castillo serves on the Texas Organizing Project’s healthcare committee, which advocates for the Lone Star State to expand Medicaid under the Affordable Care Act. It’s one of just 12 states that hasn’t.

“Doctors are strong proponents of the eviction moratorium because our medical doctors have made the very same argument that we need to keep people quarantined in order to keep the whole community safe,” she says. “Because if not, we’re just going to have the spread of the virus. We just need to ensure that when folks contract COVID, there is space for them to quarantine.”

In a time when “housing is indeed healthcare,” she adds, access to homes or places to shelter will help community members and their families stay safe.

Letting her community know about the eviction moratorium has been a prime concern throughout the pandemic, which is now stretching into its second year.
I ask her if she thinks that policy change will take time to make its way through the halls of government.

Castillo replies by pointing to the difference between policy that’s pushed by community and policy promoted by politicians who think they know what’s good for the city.

“I think it’s important that change comes from the bottom up, not top down,” she says. “You have to work together. If not, that’s when the change is slow. It helps when there’s neighborhood associations and other coalition folks meeting and pushing for the same thing.”

When our conversation turns to outgoing District 5 Councilwoman Shirley Gonzales’ eight years on the dais, Castillo says she appreciates Gonzales’ focus on an equity budget. The candidate also speaks highly of the Shotgun House Initiative, the housing preservation project the councilwoman helped push.

I ask Castillo to list the three top priorities in her COVID-recovery plan.

“We need to identify funding for our legacy businesses for grants, and we also need to make sure that we’re cutting any red tape that’s restricting small businesses from accessing the funding,” she says, outlining her first.

Her second priority is investing more in Metro Health, while the third is increasing the amount of housing assistance the city offers.

Castillo is keeping up her mental health during the pandemic by running in her neighborhood, but admits she misses the in-person quality time with loved ones.

“[It’s] just like the...interconnectedness,” Castillo says. “It’s still here, living so close to family and networks. We depend on each other for so much.”