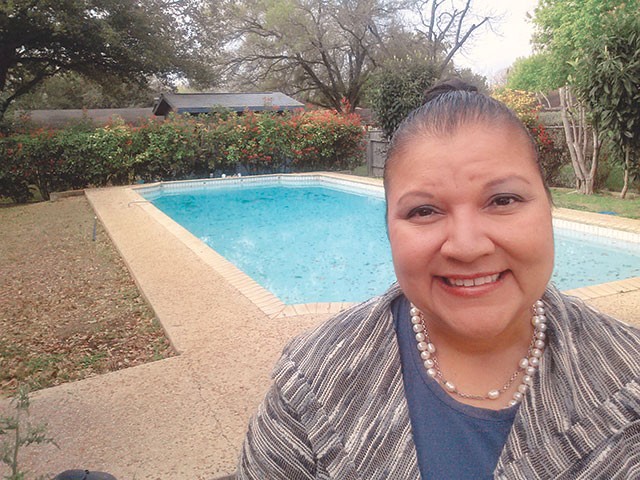 Former City Councilwoman Debra Guerrero doesn’t wear a ton of jewelry, but the gold James Avery charm bracelet wrapped around her wrist is connected to a mini cancer awareness ribbon and a memory. Seven years ago, on her 41st birthday, she received a breast cancer diagnosis and, after time, a realization: “That people are brought into your life because at some point you’re going to need their strength, their skills, their knowledge.” Guerrero, who is running for Bexar County Commissioner in Precinct 4 against Tommy Calvert in May’s Democratic primary runoff election, is quick to admit that she couldn’t have risen from the ashes without a little help from her friends.

Guerrero’s voice is upbeat as she explains via phone her last-minute decision to run. “I’ve stayed involved in my community but as far as elected office, I was like, ‘Been there, done that.’” She changed her tune, however, when State Senator Leticia Van de Putte’s speech announcing her bid for Lt. Governor left her unexpectedly moved. “She made me proud to be a Latina and a woman in Texas. I couldn’t complain that there were not enough women in public office if I, when presented with the opportunity, did not step up and take that risk and present myself.”

In matters political, this is a typical Guerrero sound bite. “Fifty-one percent of that population is female,” she says. “We need to make sure the Commissioners Court reflects—gender-wise—the entire population of this county.”

Guerrero’s favorite film Cinema Paradiso (1988) and its story of mentorship continues to inspire her as she encourages young women to speak out. “Everyone deserves to be at that table, but you have to ask.” A hard-earned lesson from the former city councilwoman who admits that while at City Hall, she would “step back and defer to others. It’s about really leaving a legacy for that next person that might not look like the majority of our state legislature.”

Although Guerrero has been plagued with scandal over what some call her questionable association with architecture firm owner and Democrat fundraising bigwig Henry Muñoz, she remains proud of their friendship.

“Your friends are your friends win or lose especially when you are in elected office,” she says. “I guess the parts I’m disappointed in, is that when [reporters] bring up Henry’s name, it’s all in innuendo, gossip [and] what they think our relationship is. When I got sick seven years ago, my friends gathered around me. Henry was one of those people.”

Her tie to Muñoz is not the only “gossip” still in circulation.

“Are you a member of the LGBT community?” I ask.

“No, I’m not. But I wish I was,” she replies. Her support of the 1998 non-discrimination ordinance that she “crafted and fought for” was not enough to win the endorsement of today’s Stonewall Democrats of San Antonio. “I’ve been an LGBT supporter since before it was cool,” she claims.

How quickly we hit refresh.