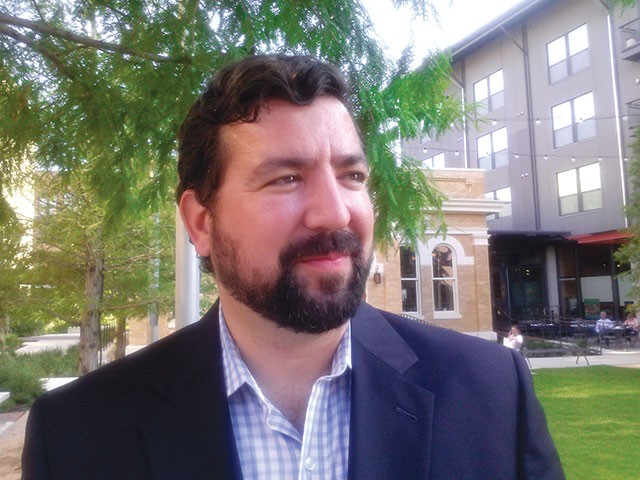 In a cozy but over-sunlit corner of Local Coffee at the Pearl Brewery, John Marcus Bustamante, candidate for Bexar County’s 45th District Court Judge, sits across from me wearing a sky blue-checked shirt underneath an indigo blazer. Fresh from winning his May Democratic runoff, he now goes on to face a new rival, Republican nominee Stephani Walsh, in the general election. In his second bid for public office, Bustamante seems to have finally conquered the demons that have kept his name off the ballot, a place he now feels it rightfully belongs.

Not unlike the dynastic names of Castro, Cisneros and Wolff, Bustamante’s surname carries both a local and national political history.

His father, former Congressman Albert Bustamante, who served time in prison on charges of bribery and racketeering, also served as Bexar County Commissioner (Precinct 1) and a county judge. “It was in the blood,” John Bustamante, now 38, says.

“It is an interesting upbringing,” he admits of the lives of the offspring of career politicians.

And Bustamante had more than his share of high school woes. “You would have situations where, you know, your dad would be in the paper and it wasn’t always positive. In fact ... at that time ... it was rarely positive,” he says, noting the bad press didn’t escape cruel classmates’ eyes.

Although the negative experiences of being a “congressman’s kid” seemed copious, Bustamante says there were just as many positives. “I’d experienced more things by the age of 16 than most people ever experience—period.” Things like going to state dinners and sitting a few tables away from former President George H. W. Bush and “whoever the president of Mexico was at the time” were par for the course. It was at one of these lavish functions that he even got to meet famed athlete David “The Admiral” Robinson.

When his father was convicted in 1993, Bustamante vowed never to run for office. “It was bad,” he recounts. His almond-shaped eyes squint at the memory. “I was paging in Congress the summer before I went to college.” He was 17 at the time. “The ‘Bustamante Convicted’ headline was on the top of the fold. I had to deliver the paper to the various members of Congress.”

He re-crosses his legs (in quite possibly the most masculine way I’ve ever seen), inadvertently flashing a pair of Caiman alligator boots.

“My dad went to prison when I was a freshman in college. He went to prison five days before my spring semester exams.” He tilts his head slightly to his right. “I failed every single one of those exams.”

Bustamante’s vow held out for many years. But 2010 made him reconsider his decision.

He ran for Congress in 2012 and lost in the primary to Pete Gallego and Ciro Rodriguez. “It was a messy race because we had redistricting issues.”

But he says it was a good experience and he discovered something he found rather surprising: He loved the political experience. “It was something that invigorated me,” he says. “I want to run for judge because I think we can make the system better.”

Bustamante stands by his dad like the many loyal Hispanics who still feel the elder Bustamante was somehow a scapegoat.

“My father provided me with a great number of opportunities just by virtue of who he was,” he says. Before University of Texas law school, Bustamante attended Massachusetts Institute of Technology to study neuroscience.

An accomplished intellectual property attorney with criminal and family law matters, Bustamante has spent over a decade in courtrooms around the country and has lived to share a few trade secrets. “One thing juries do exceptionally well is tell if you’re telling the truth. If you, as the lawyer, are trying to be something you’re not, that jury’s going to punish you. And they’re not just going to punish you ... they’re gonna punish your client.”

Speaking of all that, Bustamante thinks that TV shows hinder people’s understanding of how justice truly works. “They end up being cartoonish,” he says. “The issues they deal with tend to be the Maury Povich of issues. There’s a saying: ‘Bad facts make bad law.’”