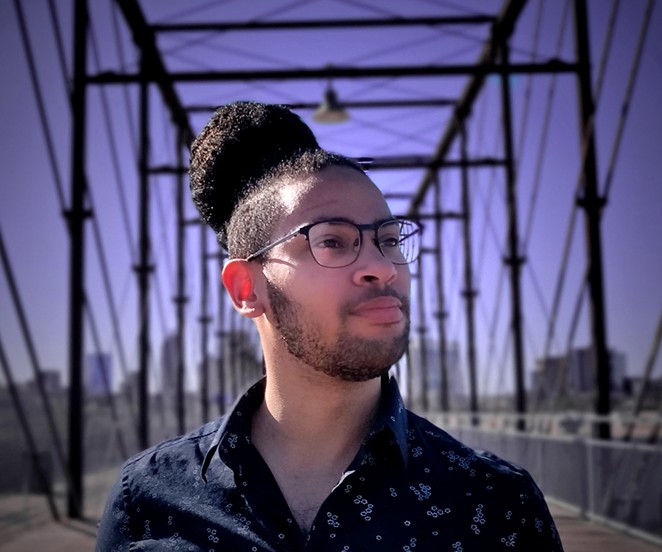 Jalen McKee-Rodriguez isn’t daunted by the fact that 11 other candidates are running to represent the East Side on San Antonio City Council.

Indeed, he was expecting the District 2 race to be a crowded field.

As we chat over Zoom about his life and career, I gain a deeper understanding of his sense of purpose and drive. That includes why he’s working to unseat first-term Councilwoman Jada Andrews-Sullivan, for whom he worked as director of communications from June to December of 2019.

“Whenever I choose to do something it’s because I feel like there’s a need that I can fill,” he says of his bid for elected office. “I’m running because I recognize a need.”

Born in Knoxville, Tennessee, McKee-Rodriguez, 25, grew up in a military family. The constant moving helped develop his adaptability, build relationships and inspired him to be a better version of himself with each new environment.

After earning a communications degree from UTSA, he initially embarked on a career in advertising, a field he believes has the potential to create cultural norms.

“There’s power in representation,” he explains.

After graduation, McKee-Rodriguez volunteered as a full-time tutor, mentor and coach at Davis Middle School on the city’s East Side. During his work there, he noticed a disconcerting lack of representation.

“I learned that less than 1% of educators are Black men,” he says. “And I realized that I had never had a Black or Latino male teacher.”

McKee-Rodriguez, whose mother is white and father is Black, identifies as a Black man.

“[My] husband is Mexican, so that’s where the Rodriguez comes in,” he adds.
“I thought about how I had a strong, Black male figure in my life in my dad and that there are so many kids throughout the country who don’t know what it’s like to have a Black man care about you, who is knowledgeable on a subject or is just there every day in your regular life,” he says. “The only interaction they get with a Black man is what is shown in the media, which often isn’t an accurate or compassionate depiction.”

Seeking to better that situation, McKee-Rodriguez decided to pursue a career in the classroom. Soon after, Sam Houston High School hired him on as a math teacher.

“While I was there — and I saw this at Davis too — this is the first time you see middle schoolers being handcuffed,” he says. “Children come to you and confide in you when they’re being sexually abused at home. Parents tell you when they’ve lost their job and they don’t know what to do and academics isn’t their main priority. They’re coming to you because they literally don’t know who else to come to.”

Aware of the impact local government and policy have on the lives of students and their families, McKee-Rodriguez turned his attention to San Antonio’s political scene.

“I feel like I learned a lot from her, as far as fundraising goes,” he says.
A year later, he offered to assist then-candidate Andrews-Sullivan, who was running in District 2. For six weeks, he worked as her campaign manager, but because he was still teaching full-time, he later transitioned into the more manageable role of communications director.

After Andrews-Sullivan prevailed with 52% of the vote, McKee-Rodriguez joined the incoming staff at Plaza de Armas. The overall experience, he recounts, was less than gratifying.

“It was a rough time in that office,” he says. “The first thing I learned was the company that you keep is super important. If you’re surrounded by people who are compassionate, empathetic and want to do good, you’ll find yourself going down that path. [But] if you find people who are the opposite of that, then you’ll go down another path.”

Since Ivy Taylor’s mayoral appointment in 2014, there’s been a revolving door in District 2’s council office. McKee-Rodriguez says that’s because some who held the seat didn’t take the job seriously enough. Now on his own political steam, he says he can offer improved leadership for the often-overlooked East Side community.

“For so long District 2 has been fed hope,” he says. “We’ve been promised everything before. We need action. I think we need high-quality, energetic leadership, someone who recognizes the importance of every decision they make and can serve for eight years.”

When I ask McKee-Rodriguez how he feels about Black History Month, he describes it as both a celebration and a reminder.

“A celebration because Black is so diverse and so beautiful, and also a reminder that not that long ago, things weren’t so good, and we do still have barriers to break through.” He pauses. “I know that we, as a society, haven’t come as far as we’d like to believe. Even when I was growing up it really wasn’t acceptable for my mom and dad to be together, and that wasn’t that long ago.”

“It’s hard being biracial and my mom asking, ‘Oh, why do you identify as only Black? You’re half white!’” For me, it’s that I go through life as a Black man. [If I were to] walk somewhere and I tell them, ‘I’m white?’” He shakes his head. “It doesn’t work like that. So many of the fears I have, so many of the choices I make are dictated by the fact that I’m a Black man.”

Even so, he says, it’s a discussion his mother welcomes.

“I think that’s a conversation a lot of biracial people should be having with their parents.”