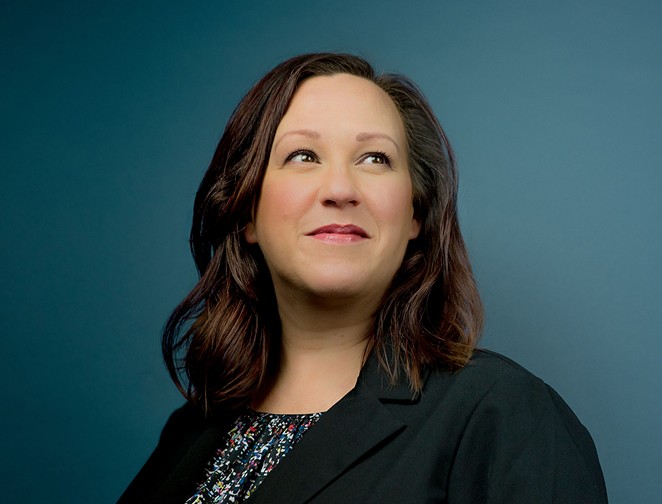 When she pops up on my screen, MJ Hegar looks every bit the friendly wife and mother she’s played on a couple of her TV spots.

But despite that disarming appearance, she’s downright fearless, beyond the guts it takes to run a hotly contested race against one of the most powerful men in the U.S. Senate.

In 2009, on her third assignment, she was shot down by Taliban ground fire. The wounds she sustained won her a Purple Heart. On her Instagram feed, she proudly shows off the cherry blossom tattoo on her shoulder, which was a way to cover up shrapnel scar tissue.

That alone would have made the perfect end to a heroic story.

But Hegar, 44, a Democrat, was just getting started.

Starting in 2012, fresh out of the military, she worked to change the Combat Exclusion Policy’s restrictions on women applying for ground combat positions in the armed services. That’s when Hegar got her first real lesson in Washington politics.

“I would say that my education on the — and I’ve got to come up with a word that makes me sound smarter — the grossness of politics [was when] I went to D.C. to fight to open jobs for women in the military,” Hegar says from her campaign HQ in Round Rock.

She recalls a word-for-word exchange with a legislative assistant she called on.

“Yeah, that makes sense that opening these jobs for women in the military would make the military stronger, but why should we support you when you have no political capital and you won’t be there to support my boss when he has an initiative that he’s trying to push?” the assistant told her.

Hegar reenacts her incredulous response. “I was like, ‘I’m sorry. Did you just say it would make our country stronger, but you won’t support it because I can’t support you?’”

Though Hegar wasn’t a generous donor and had no access to the proverbial smoke-filled room, she stuck with the fight.

“I was able to build a broad bipartisan coalition of support by finding servant leaders on both sides of the aisle who would put the strength of our country ahead of whatever political quid pro quo they wanted,” she remembers. “You know, to show them what is in line with their values and their constituents’ values.”

After her success there, Hegar gained confidence that issues such as climate change and gun control could also find common ground if approached the same way.

“We just have to get better at speaking to people’s values instead of pushing our values on them,” she says.

After her success on the national stage, she decided to run for elected office. In 2018, she grabbed the Democratic nomination for Texas’ 31st Congressional District, but ultimately lost the race to GOP incumbent John Carter by less than three points.

Two years later, Hegar prevailed over State Sen. Royce West in the July 14 primary to run for three-term Republican Sen. John Cornyn’s seat. As a retired rescue pilot, Hegar is comfortable with the sense of urgency that comes with running a statewide political campaign. She applies it to every mission she takes on.

“If it’s not urgent, then it’s not worth doing,” she says.

It’s easy to see how Hegar’s military background has informed her campaign style, but she says the influence runs deeper than that.

“It has formed my leadership style, it’s formed my parenting style, it has increased my sense of urgency for foreign policy. I would say it has an impact on the fact that I put the mission first,” she says. “We have a mission in front of us with the pandemic or how one out of every three Texans ages 18-65 doesn’t have health insurance or we have an economic crisis. How do we accomplish that mission?”

Hegar believes in looking to science and data, which entails listening to the boots-on-the-ground experts.

Some have compared her campaign to Beto O’Rourke’s narrow-miss 2018 run against Sen. Ted Cruz, but she’s reluctant to peg her campaign as a movement. Instead, she says regular Texans are just “waking up” and trying to break the trend of voter apathy.

When our conversation turns to motherhood, she explains how her maternal nature and her fierce inner warrior are two sides of the same coin.

Hegar’s biggest branding moment happened while she was qualifying on weapons during military training. One of her instructors told her that she shot like a girl. Women, for a variety of reasons, tend to be better shots than men, he explained.

That conversation inspired the title of her 2018 memoir, Shoot Like a Girl.
When I ask her how challenging it is to make people aware of women’s strengths, she concedes that it’s difficult.

“There’s that U2 song, one of the lines is ‘Are you [tough] enough to be kind?’” she says. “[There’s] this idea that compassion and empathy are somehow a weakness. I love being a combat vet and a Democratic candidate because this idea that Democrats somehow have a glass jaw and are snowflakes and are easily offended and somehow weak [isn’t true]. Standing up for people is not a weakness.”

I ask if there was a figure in her childhood that showed her it was OK for women to be strong.

“Sigourney Weaver in Alien?” she says with an upward inflection. “That was an early one. Seeing her in combat and seeing that her strength in combat wasn’t how many pushups she could do; it was her skill and her training and her strategy and her mind and her ability to outthink things.”

She was able to shoot like a girl, I suggest.

“She shot like a girl,” Hegar replies, nodding slowly and smiling. “Exactly.”