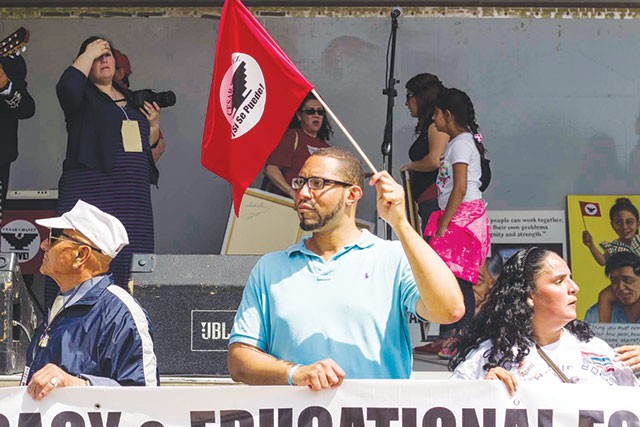 Tommy Calvert, candidate for precinct 4 Bexar County commissioner, says his love of reading has dramatically sharpened his skills in the art of debate. One of his current favorites—for its plethora of “life lessons”—is Many Lives, Many Masters: The True Story of a Prominent Psychiatrist, His Young Patient, And The Past-Life Therapy That Changed Both Their Lives by Dr. Brian L. Weiss. The acclaimed work explores the author’s experiences in the field of past-life regression, in which his patients reveal their “purpose in life” in great detail. “It talks about us having many lives and about the process of coming back to become a better person,” Calvert says. “The Bible talks about reincarnation … it’s not heavily taught in most churches.” Earlier this month, when he and former D3 City Councilwoman Debra Guerrero both nabbed a nifty 26 percent of the vote in their Democratic primary, they wiped the board clean for a May runoff that could be, for one candidate or the other, a golden opportunity for a bona fide political rebirth.

If he wins, it would be another turning point for a man whose significant life events have come about mostly by accident. “Being prepared to deal with those accidents is the sign of a good leader,” says Calvert on a brisk Saturday morning via phone. Leadership is certainly in Calvert’s DNA.

His father was a community organizer and his mother, a corporate executive for IBM. He was born a block from Martin Luther King Boulevard and attended St. Mary’s Hall on scholarship—a circumstance that would later prove advantageous. “I’m able to go between both groups, the poor and the very wealthy, with no problem,” he says.

On KROV 91.7 HD2 FM, Calvert and his fellow “infotainers” play R&B music and chime in on the breaking news of the day a la Howard Stern meets the cast of Good Times over chorizo con huevo breakfast tacos.

“Starting a radio station wasn’t on my plan,” he admits. “By accident, I got it off the ground. It’s always been these big things I’ve done for the community and here’s another one,” he says regarding the race that could crown him the first African-American county commissioner in the history of the local office—a still-meaningful milestone in some circles. “And the youngest—but this was not on my plan,” he repeats. “I really wanted to be a business person.”

With his poised passion, quietly reminiscent of former U.S. Labor Secretary Robert Reich and his career-long journey expounding on the country’s widening economic gap, Calvert discloses his determination to continue the uphill battle for his precinct’s “fair share of resources.” Puffing his lips, he discloses, “The community was telling me that I should run … it was kind of a teeth-pulling experience but I’m 1,000 percent in now.” Calvert, 33, had “retired from politics” to focus on himself and perhaps go to law school. “I’ve really neglected my personal life for the community so [deciding to run] was a very hard decision.”

He’s confident that his “wealth of knowledge about how to get things done” (on which he can expound, with eye-widening particulars) will keep SA on a path to becoming “a world-class city,” a city that will inevitably have to carry on without its mayoral rock star. “San Antonio is 30 years behind every major city in America with respect to revitalizing its urban core. Precinct 4 is a jewel and it’s pregnant for rebirth.”

Calvert has nothing but love for Tommy Adkisson who’s held the position since Dawson’s Creek was cool and recently lost his bid in the Democratic primary for Bexar County Judge to incumbent Nelson Wolff. “Tommy, among his greatest hallmarks, is that he didn’t change in terms of being a people person,” Calvert says thoughtfully. “That’s something I will emulate.”

His resume in community advocacy won’t fit on just one flash drive. “I have a heart that’s bigger than most,” he says, linking his involvement to his faith. “That’s part of what Jesus did. He was out in the community—with the lepers and the prostitutes. That’s what servant leadership is.”

In 2000, Calvert—a devoted Democrat who, if playfully bullied to sub-categorize his affiliation, may bust out the word populist—served under former Congressman Ciro Rodriguez. “He told me that Republicans want to run up deficits and then gut the government because they don’t believe in it. Fast forward to 2012 to 2014 and the emergence of Ted Cruz filibuster mania [and threats like] ‘We’re going to not raise the debt ceiling and drive the government into default,’ [Rodriguez] was right. It was a valuable, philosophical lesson to understand where the conservative movement was going. He had that understanding a long time ago.”

He’s not out to demonize every shade of red. “The Republicans that I grew up with were very sensible,” he says, “I think the [Republican] party’s been hijacked.”

Nevertheless, assuming Calvert makes it out of the ring alive after facing Guerrero (a big assumption), he’ll have to face one of two worthy Republican opponents: Windcrest Mayor Alan E. Baxter or Kirby Mayor Tim Wilson. But Calvert is suave when he boasts about his readiness challenging any “far-right winger” to some Lincoln-Douglas action. “They can’t debate me. They get their facts from Rush Limbaugh. I get my facts from books and life.”

Win or lose, there’s always the next life.