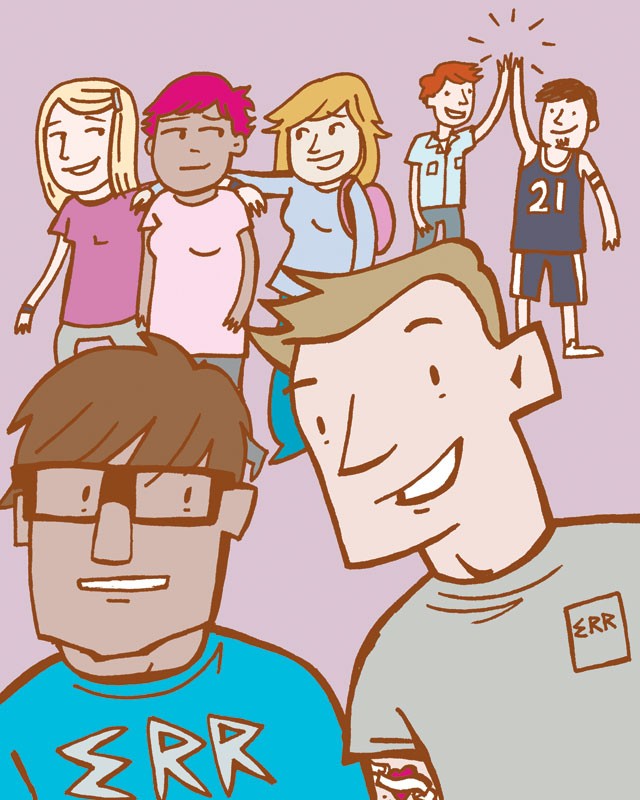 Imagine a group of people a lot like you. Chances are, you probably hang out with a group of people like that already. Let's call them "your friends." Now imagine that your friends decided to make funny T-shirts to acknowledge the bond between you all. You already hang out all the time, so the T-shirt is just acknowledging something already there. If at that point one of you were to say "we should make this official and register our group" — congratulations, you're basically a fraternity. You'll have to go through some frustrating paperwork and petitioning, but it's not that hard.

So why, in spite of this, do some Greek organizations have the reputation of being a place where individuality goes to die? Never attribute to malice what you can ascribe to, in this case, circumstance. A fraternity or sorority isn't a group of people trying to conform with each other, but a group of people who realize they get along well with each other and want to get along more often. Realistically, brothers and sisters with similar personalities did not become alike over the course of a rush, and the idea that fraternities and sororities turn innocent students into beer-pong drones or Stepford wives is unfounded. In other words, a fraternity or sorority is simply people who are a lot like each other who want to share what they have in common in a slightly more official capacity.

These commonalities are important. Solid friendships are rare in and after college, and that's the main benefit a fraternity provides. Ask yourself if you've ever needed a serious favor, say, being bailed out of jail or driven to the airport at 5 a.m. on short notice. Run-of-the-mill friends will be comfortable denying you these things. Really good friends, though, will feel a little obligated and will feel legitimately bad if they blow you off.

Fraternities and sororities foster those tight kinds of friendships. And most fraternities will have members willing to help another member simply for existing under a shared banner. So even if you're class of 2014 talking to someone from the class of 2000, if you were in the same fraternity you can receive help based on that commonality alone, knowing that you'd do the same if you were in their shoes. I've seen it happen.

I've also seen some students go through the entirety of college with little to no outside acknowledgement of their existence. I assure you, if you join a fraternity or sorority that will not be the case for you. There are few opportunities in college to get to know a large group of people in such a close capacity as you do here. Team sports and arts performances come close, but not quite. Having so many people know who you are is not just a relieving feeling, it actually helps one mature due to the constant feedback from others who know you, well, like a large family.

You will hear a lot of fraternity brothers and sorority sisters talk about "brotherhood" and "sisterhood," respectively, as if they're grand concepts, but I think the everyday definition is mundane and useful: a bunch of people who, through common shared personality traits, get together and form closer friendships without needing an excuse to socialize. After enough of that, they sculpt something resembling a family-like bond. It's not a mysterious process, but it is a good reason to consider joining in.