Go With The Flow: A Non-Touristy Option To See SA From The Water 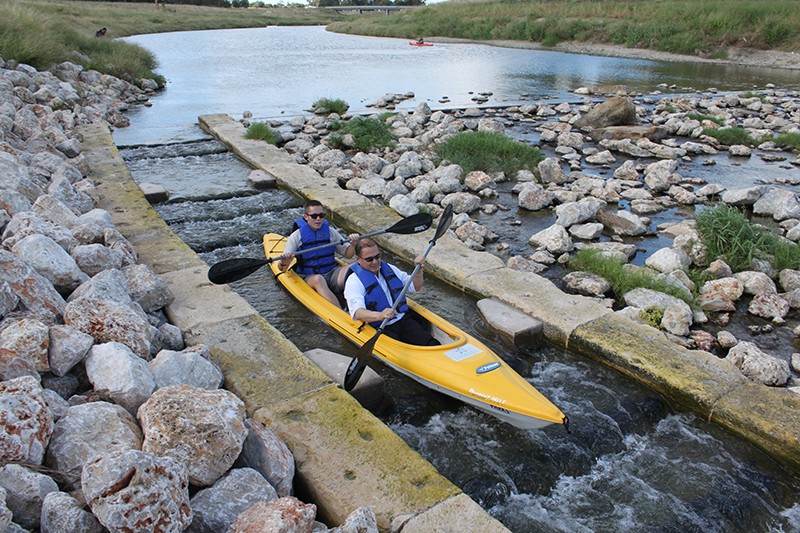 The San Antonio River isn't necessarily for thrill seekers or adrenaline junkies. It's known more for its serene, tranquil drift.

But paddling a couple miles by canoe or kayak is a laid-back way to let the hours float by. It's tough to find nature amidst San Antonio's broad concrete swaths, but a day on the river is one way to do it.

Though many of the put-in spots around town are in or around San Antonio's urban core, it doesn't take long for the constant crushing whir of traffic to fade into a buzz of crickets, birdsong, and ducks dabbling along the banks of the River Walk.

Yvi Serbones, community relations coordinator for the San Antonio River Authority, said that the river's mild current and low depth make it perfect for beginners or any paddler looking for a low-key trip.

"We're talking about a slow-flowing river. It's very smooth to paddle," Serbones said. "It lends itself to a very ... easy journey."

Serbones said that an eight-mile paddle typically takes around four hours to complete.

If you don't have your own canoe or kayak, check out SARA's website for contact information for approved vendors that offer equipment rentals, guided tours and instruction. The site is also a good resource for checking river conditions.

Some vendors allow walk-ups, while others require reservations. Most offer shuttle services to take you back to your point of origin after the trip. Check with individual vendors for reservation policies and which services they offer.

One of the most popular sections of the river is the newly-restored Mission Reach, which extends eight miles from South Alamo Street just past Mission Espada. The restoration included planting native grasses on the riverbank, making the river put-ins more accessible and installing additional aquatic habitat.

Banta said her customers often comment that the convenience of paddling within the city limits is tough to beat.