Feminism has turned into such a dirty word.

A quick search of the term snowballs into largely misinformed conversations about female politicians, the dissolution of the nuclear family and the many supposed hazards of political correctness. But, as it goes, reality is not a smattering of politicized headlines.

Present-day feminism strives to mend social ills by addressing issues that pervade almost every facet of modern life, targeting the impact of sexism on our workforce, educational system and culture at large. Indeed, in New York – the epicenter and quantitative benchmark of the art world – women make up only a quarter of solo exhibitions despite earning half of the Master of Fine Arts degrees granted in the United States, according to the National Museum of Women in the Arts.

Far closer to home, a willingness to combat this statistic permeates the nebulous mission of FLAX Studio, a gallery that doubles as a working studio located in the Lone Star Arts District of San Antonio.

Tucked away inside the bright turquoise edifice that houses the SMART Art Project Space, FLAX Studio originated as the collaborative project of Katy Silva, the marketing and communications director at the Guadalupe Cultural Arts Center, and Andrei Renteria, a current participant of the community-based organization’s Artist Lab fellowship.

In an interview with the San Antonio Current, Silva explained that FLAX Studio directs its curatorial efforts toward diverse groups of socially disadvantaged artists, which happens to include women and ethnic minorities alike.

“I think … a common place that both [Renteria and I] look at is communities of other people who are overlooked or not given a voice,” said the artist. “You go into any art gallery or museum, and historical works often objectify the woman … But, rarely do you look at the wall tag and see a woman as the creator. It’s always the inverse.”

An independent painter and graphic designer with Sammis Ochoa PR firm, AtticRep Theater Company and Centro San Antonio among her clients, Silva has personal experience of this double-standard. She described receiving criticism after showing a painting of a male nude that she modeled after Michelangelo’s David: “I had males come up to me and say, ‘[This is] so distasteful ... How could you show a male naked body like this?’ I mean, it’s funny that women are often portrayed in more provocative poses, but because it was a male nude, because it was contemporary, that reversal happened. It pissed me off.”

The artist redacted the piece by affixing a three-dimensional floral element to the figure’s privates, an act of self-censorship she admitted to regretting, in retrospect. The nude now rests in a stack of panels behind the showroom, a visual reminder of the casual sexism often pitted against female artists today.

“The subtext of a lot of conversations I’ve had with people have taken me less seriously,” she said. “Whatever hat I wear, it’s play or hobby. I think that’s often what women feel when they’re serious about work … and about being an advocate for arts.” 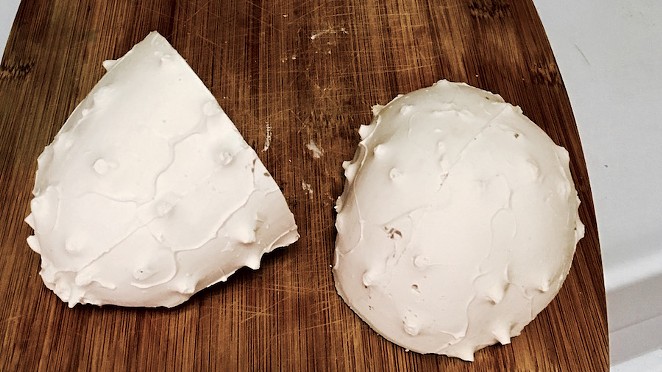 On Saturday, September 10, FLAX Studio unveils Kelly Johnston’s Ephemera as a part of this month’s Second Saturday Art Walk, a neighborhood event on the intersection of South Flores Street and Lone Star Boulevard that connects local artists with professional development tools, as well as the community itself.

Johnston told the Current that she was inspired by her mother’s painful struggle with dermoid cysts, abnormal pockets of tissue that contain blood, teeth and clumps of hair. To this end, she crafted a series of fruit-like sculptures casted from inorganic materials and adorned with long hair follicles for Ephemera.

“It’s hard for women, period. There’s stuff people don’t talk about, because it’s gross and dirty. There’s a culture the art world breeds, and if you don’t fit into it, it’s hard to be heard,” said Johnston. “Katy Silva gives those people a voice … It’s good to have someone look beyond your portfolio, to have a better idea of who you are. She brings a lot of integrity to the San Antonio community. Her focus on showing marginalized populations will be really exciting in upcoming years.”

“There are so many badass women here in San Antonio,” explained Silva, reflecting on the purpose of FLAX Studio. “I realized this is a focus. There is still a need for it.”