The cuisine is awakening at Oro 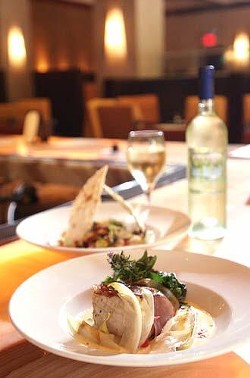 
Here's a promise: In writing about Oro, there will be no cheap references to "good as gold," "gold standard," "fool's gold," etc. Although it's tempting, very tempting.

My first comment does have to do with gold as a color: The faded blue denim shirts on the waiters have to go - with the possible exception of the one on our waiter. (It matched his eyes, according to a dining companion who notices such things.) As a part of last year's redo of the Emily Morgan, Oro rose from the ashes of the utterly undistinguished Yellow Rose Café. Now garbed in golds and deep browns, illuminated by handsome fabric pendants, sconces, and votive candles, and sporting such fragrantly opulent touches as an alabaster bar glowing from lights placed beneath, the restaurant has an air of elegance rivaled by few in the city. The second-string waitstaff is garbed in black, tunic-style jackets. So what's with the denim? Think of an evening at Oro as theater, and you'll understand where I'm coming from.

Thinking of the menu as Modern Italian, as it claims to be, may help define its direction some, but isn't really necessary to enjoyment of the meal. Fried calamari are a dime a dozen (not literally, alas) on local menus of every stripe, and the oven-roasted vegetable stack with a balsamic drizzle could come from any contemporary kitchen. As it comes from Oro's, it's a towering, impossible-to-eat-without-deconstructing composition, loosely held together by a rosemary skewer. Oven roasting may play a minor part, but the stack and its sidekick baby zucchini and pattypan squashes seemed to have been assembled exclusively from grilled components: creamy eggplant, thick tomato slices, and more substantial squashes. There may have been a little black pepper, the balsamic was sotto voce in the extreme, and salt was sorely lacking. All the parts were very good individually, but they added up to a plate of expertly grilled vegetables.

The appetizer section is labeled "small plates" (nothing new there, but it allows them to call entrees "not so small plates"), and if you're trying for a variety of experiences, good luck; we ended up with three, very veggie selections due both to our dismissal of calamari as common, and ol' blue eyes' dissing of the fennel-poached shrimp martini as a poor substitute for shrimp cocktail. So, arugula "cannoli" it was - the title alone was intriguing. Turns out the cannoli was actually a kind of frico, which amounts to fried parmesan rolled into a cylinder - in this case around the peppery arugula - while still hot. Good idea, beautiful presentation, poor execution. The frico, which is supposed to be delicate to the point of shattering, was almost too tough to cut with a knife. A grilled portobello and shards of well-roasted red pepper acompanied the roll, a bit of balsamic had been drizzled about, and the flavors were all fine. It's just back to square one with the cannoli.

The chef's light hand with a simple, olive oil dressing was evident in the above, and it served him well on our intermezzo, a grilled romaine and radicchio chopped salad with cannellini beans, roasted romas, and ricotta salata. In short, this was a very satisfying salad. Inspected at length, it fell short on several fronts. For starters, it was well-larded with unmentioned bits of fried pancetta - not unwelcome at all, but a surprise, especially to someone expecting a totally vegetarian dish. Then there's the part about grilling and roasting. Those few pieces of romaine (mostly) and radicchio that had actually seen the grill were quite good, but they were by no means in the majority. Roasting was hardly apparent in the finely chopped tomato. We could have counted the cannellini beans, so few in numbers were they. The ricotta had been omitted altogether. Baby Blues to the rescue with a cup of cheese - a little musty, but appropriately salty. And despite all this, a good salad.

BB offered to let us taste a couple of the pinot grigios that we were contemplating as entrée enhancers. We fell for the first one, a 50-50 blend of chardonnay and pinot grigio by Le Rime. Crisp and appley, it was good both cold and as it warmed a little. Fortunately for the wine, we had already discounted the roasted venison on cauliflower mash with dark chocolate demi-glaze as being aberrant - despite BB's assertions that the chocolate played a very minor role. Perhaps we should have listened to him. Having rejected his suggestion of pork loin due to its almost-always-dry aspect (he claimed the chef's to be just the opposite), it arrived anyway, looking great on a bed of polenta, if I recall correctly. Stubbornly, we returned it to the kitchen in favor of the actual order of pine nut-crusted chicken and roasted tomato risotto. Possibly a big mistake.

Perhaps chef was pissed, but the pine nuts were pasted on after-the-fact with a layer of what appeared to be mascarpone (or a thinned cream cheese), and although there was nothing wrong with the mostly de-boned chicken, there was also nothing really right with the combination. As for the risotto, we expected the usual creamy rice tinted with mellow tomato. What arrived was a pool of tomato - tasty, admittedly - with rice almost as an afterthought. If this is modern, let's take a step back.

On a more positive note, I would step right up to a plate of prosciutto-wrapped sea bass again. Although the menu didn't adequately describe it, the dish was generally a triumph. Yes, I quibble with the definition of endive fondue (it could have been more "melted"by whatever means), but the bitter endive's combination with cream was a perfect foil to the mellow bass and the crisp, slightly salty prosciutto. I didn't expect the advertised spinach to be deep-fried either, but that was a master stroke - as were the perfectly golden slices of sautéed garlic. Sometimes it takes only one dish to rescue an evening from indifference, and this was it.

Certainly it wasn't the dessert or the nearly flat glass of Piper Sonoma we had with it. (We loved the lavender-scented Canoe Ridge Riesling, however.) The recited dessert list was short, and from it we elected to share a poppy seed shortbread with lemon curd and champagne-macerated berries. Beautiful berries, quality curd, but the shortbread was actually a biscuit as hard as a hockey puck. All it took was a comment to Paul Newman peepers and, jeepers creepers, right off the bill. Which was exactly the right response and the kind of service that makes one want to come back. Red wine next time, and maybe both the venison and the pork. Somewhere, there's gold in them thar hills. •