Good Neighbor: Eastside Kitchenette Winning a Fan Base That Extends Beyond Its Government Hill Digs 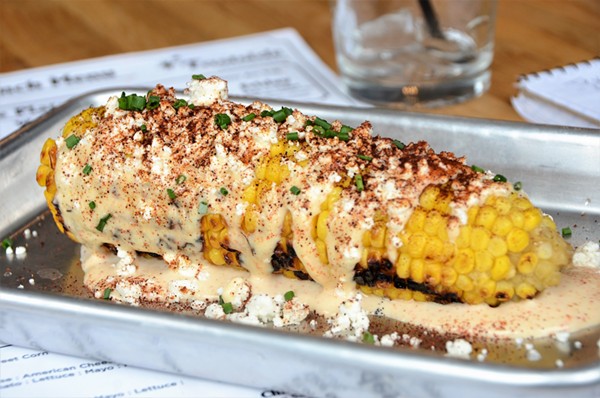 It’s not easy for new restaurants to become part of the fabric of a neighborhood, but just weeks after its January opening, Eastside Kitchenette is on its way to making that happen.

The restaurant, found in a historic home in the East Side’s Government Hill, is already building a loyal following for approachable Southern cuisine served up by owners and staff well-versed in the city’s fine-dining scene.

“I’ve been cooking for [more than 30 years], and the last 20 of them have been spent in fine dining,” said Jeff White, who previously served as executive chef at the Boiler House at the Pearl and at Tucker’s Kozy Korner. “What I’m doing here is Southern comfort, it’s homestyle food, all made from scratch, but it comes easy after all the years of doing that in places [where that’s] standard.”

White and his wife Jenn spent more than a year renovating the building, including foundation and drainage work and passing 28 city inspections to bring it up to code. Surprisingly plentiful seating is spread through the old dwelling, and the walls are decorated with antiques and found objects.

Beyond the homey ambiance, though, the pair have also worked to create an inviting menu and cultivate an accommodating staff. Eastside’s focus on exemplary food and service attracts not just neighbors, but business crowds and folks from other parts of the city.

White isn’t looking to reinvent anyone’s idea of Southern cuisine or create dishes that are easy to eat gracefully or without getting sauce on your face. Eastside’s pimento bacon hushpuppies, fried house-made pickles, Mexican corn and fried-chicken cobb salad are simple yet flavorful.

The restaurant’s popular daily Blue Plate specials, which include pierogis on Mondays and fish and chips on Fridays, show the kitchen’s commitment to fresh local produce. A brunch menu offers classic Southern standbys, including chicken and waffles or shrimp and grits.

Jenn White, meanwhile, has developed a fun and relaxed cocktail menu that includes drinks like the East Side Old Fashioned, East Side Sangria and the Line ‘Em Up — a Miller Lite served with two shots of Evan Williams Bourbon.

“There’s no pretense,” Jeff White said. “The restaurant, as well as the menu, is very approachable. It’s all things we know, things we love — just with a little twist here and there.”

“Since we’ve been up and running, [the staff] has knocked it out of the park, and customers haven’t stopped talk about their experiences with the front of house and back of house,” he said. “I mean, everybody’s just [working like] they have a lot of stake in this place as well; they’d been waiting for a while [for the restaurant to open].”

Eastside’s porch, which provides breezy screened-in seating, a kid- and dog-friendly space and three TVs, has the potential to make Eastside Kitchenette an ideal escape from the near year-round heat. It seems like the perfect ambiance for enjoying cold cocktails and watching a Spurs game.

“We want to be known as a neighborhood restaurant, where you know everyone, and you can bring friends and family to come relax,” he said. “We’re proud to have taken something old and made it new.”

2119 I-35
East Side
San Antonio, TX
(210) 507-2568
Southern and Bar/Pub
Map
So many restaurants, so little time. Find out the latest San Antonio dining news with our Flavor Friday Newsletter.