Rock And Roll Continues To Survive On The St. Mary's Strip If I did hard drugs, I might have done some cocaine at this show. Not that I encourage people to do cocaine – it’s just that touring acts Wasted Theory and Zed play the kind of classic tough-dude rock and roll you might expect guys in patch-covered black vests to listen to while drinking Jack Daniels and partaking in some powdery stuff. It just gets you in that kinda mood.


The scene inside Limelight Thursday wasn’t short of that (people in vests, that is, not blow). Loy Smoak, who has been curating shows through his promotion company Sell Your Soul Presents, has been booking bands of the psych, doom, metal and straight-up rock and roll variety for a while now in this town, and last night proved again that he knows how to pick ‘em.

Locals Grim Reefer were scheduled to open but evidently dropped out, so San Francisco’s Zed took the stage first. The four-piece slammed through an hour set of Sabbath and Zeppelin-like riffs as the audience, still buzzing from the Spurs victory, raised cans of Lone Star as they grooved to the band’s bluesy, heavily-distorted rock. 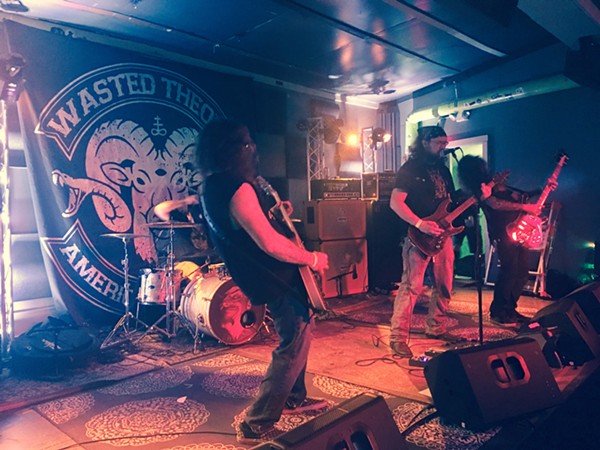 Up next was Delaware's Wasted Theory, whose guitar tones cut through the air like crisp rays of light piercing through apocalyptic clouds. “Black waters rising and I just want you to know, I’m sipping on my whiskey right beside my stereo,” their singer growled while plunging into a tune aptly titled “Get Loud or Get Fucked,” the opening track off their last record Defenders of The Riff.

Sometimes the St. Mary's Strip feels like it's saturated with indie pop. Thursday night, with a good dose of metal hair-whippage, whiskey and beer, proved that straight-up rock-and-roll still has a place on the Strip.