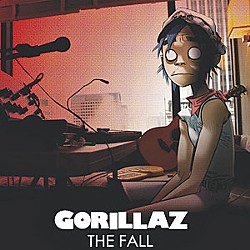 
Damon Albarn hasn’t lied to me before (that I know of). So when he releases a free, full-length Gorillaz album on Christmas Day and claims to have written, recorded, and produced the entire thing on his freaking iPad while touring the States, I have to take his word for it. The Fall is definitely a product of the road: songs are mostly named after the cities they were recorded in (congratulations, Amarillo!) and blur together as if you were watching them sail past your tour bus window. In fact, The Fall is better as driving music than anything else, as many of the songs are blippy, down-tempo instrumentals, or weird throwaways like “The Speak It Mountains” or “Seattle Yodel.” When Albarn does get around to lyrics, they read like a tour diary: constant hotel check-ins (“Revolving Doors”), fluttering highway litter (“Little Pink Plastic Bags”). But that’s about as deep as it gets — and there are no big-name celebrity guest stars or club bangers to perk things up. While Gorillaz-loverz will undoubtedly dig The Fall, there’s not much for the casual listener to grab onto. But you’ve got to give Albarn credit for releasing a full LP to fans gratis, and for attempting this experiment in hyper-productivity in the first place. After all, he could’ve just used his iPad to catch up on Netflix.