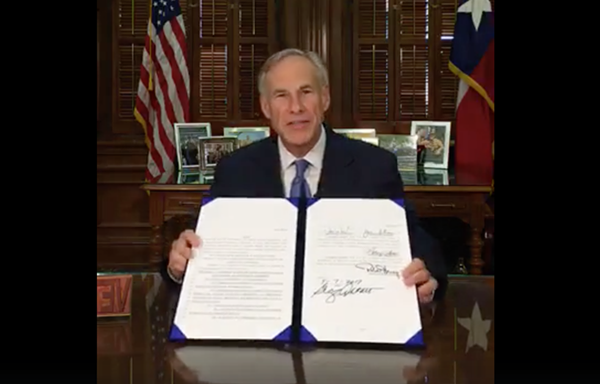 On Monday, news came of yet another lawsuit filed against Texas Gov. Greg Abbott and Attorney General Ken Paxton over a new law that's expected to extend the reach of federal immigration enforcement into local police departments.

The latest suit, filed by El Paso County officials and the Texas Organizing Project Education Fund (which is being represented by the Texas Civil Rights Project), echoes the widespread concern among immigrant and civil rights groups that Senate Bill 4, which will allow local cops to ask about immigration status in even routine police encounters, will open the door to racial profiling, particularly against Hispanics. The suit also argues that anti-immigrant rhetoric fueled the bill's passage through the Texas Legislature earlier this year. "There are many legal flaws with SB 4," the lawsuit alleges. "Racial animus fueled SB 4’s enactment, tainting the entire law with an impermissible legislative purpose."

The filing comes after Abbott, in an Express-News op-ed, accuses those opposed to the law of "purposeful fearmongering." He wrote that people who haven't committed a crime have no reason to fear the law, regardless of immigration status. He said the law only requires local jails to honor immigration detainers "issued for violent criminals."

None of which is what the bill Abbott signed into law behind closed doors earlier this month actually says. The law bars police departments in cities like San Antonio from enforcing policies that currently prohibit cops from asking about immigration status in routine law enforcement encounters. That means, as the bill's author even admitted when questioned on the Texas Senate floor, that departments could not longer stop a cop from asking about citizenship during a traffic stop if he or she wants to. (Abbott's office hadn't responded to our questions as of Tuesday morning.)

The bill would also force police departments and sheriff's offices to obey requests from U.S. Immigration and Customs Enforcement officials to detain immigrants suspected of being in the country illegally — so-called "detainers" that immigration attorneys and even one federal court have said are flawed, fall well below the legal standard of a warrant and are most likely unconstitutional. Bexar County currently abides by, and has even been sued because of, those detainers. In fact, it was Travis County's new policy of requiring U.S. Immigration and Customs Enforcement to file warrants for people it wants the county to hold (with the exception of people jailed for violent or otherwise serious offenses) that triggered Abbott's war on so-called "sanctuary cities" in the first place. The feds apparently don't even consider Austin a "sanctuary city."

Under SB 4, which is slated to go into effect September 1, law enforcement officials who don't cooperate with the feds risk a Class A misdemeanor charge and steep fines. The law even applies to college and university campus police departments.

While opponents have promised a "summer of resistance" against SB 4, legal challenges over the law have been piling up ever since Abbott signed. After its passage, Paxton filed an unusual, pre-emptive lawsuit against Austin officials seeking to declare the law constitutional. Since then, the League of United Latin American Citizens, Maverick County and the city of El Cenizo, a tiny border town that is likely the state's oldest "sanctuary city," have sued in hopes of blocking the law and declaring it unconstitutional.

The lawsuit filed in San Antonio federal court by El Paso County officials on Monday argues that SB 4, if enacted, would violate due process rights and constitutional protections against unreasonable search and seizure.

“All law enforcement agencies and jurisdictions that opt to stay out of immigration enforcement face stringent civil liability,” the lawsuit says. “And, persons in Texas, particularly Mexican-Americans, those of Hispanic descent, and immigrants and their families, will be caught in the crossfire.”

One added wrinkle to El Paso County's lawsuit is a 2006 court settlement that appears to directly conflict with the new immigration law. Officials there agreed to policies that prohibit the local sheriff's office from enforcing civil immigration law after deputies were caught conducting immigration checks at roadside checkpoints — policies that, under SB 4, would no longer be allowed in Texas law enforcement agencies.