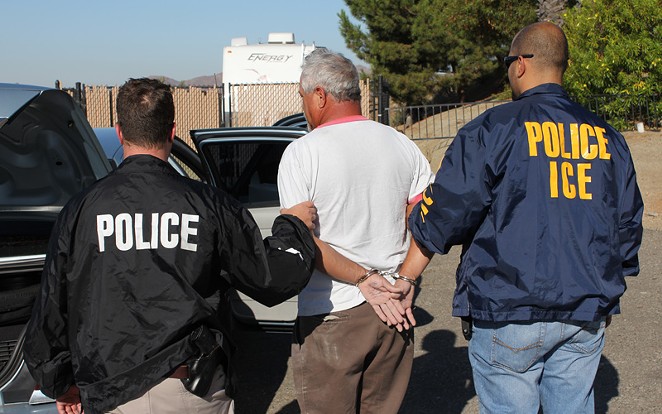 Now, Abbott's saying he'll simply fire (and potentially even file civil and criminal charges against) any sheriffs who don't comply.

In an interview Wednesday morning with Fox News, Abbott specifically mentioned stripping funds from Travis County due to newcomer Sheriff Sally Hernandez's recent announcement that she won't hold all undocumented immigrants who are arrested in the county who have already resolved their local cases and who otherwise wouldn't be detained. If the threat of defunding doesn't do the trick, Abbott added, “We will remove her from office.”

Abbott wants every sheriff's office to detain any and all undocumented suspects, regardless of the crime, until the U.S. Immigration and Customs Enforcement can pick them up. In some cases, that could mean holding a person who didn't pay a parking ticket or urinated in public for months without bail (because these small-time criminals aren't exactly at the top of ICE's priority list).

Sheriff Hernandez posted a video Friday, right around Donald Trump's presidential inauguration, explaining her new policy. Instead of holding all undocumented residents booked in the Travis County Jail system until ICE can pick them up, Hernandez said her office will only detain undocumented suspects if they have been charged with a sexual assault, murder or human smuggling — or, that is, unless the feds go through the proper channels to obtain a warrant for that person. Critics like Abbott have labeled this more nuanced way of dealing with ICE a "sanctuary city" policy.

Hernandez says her reason for the new policy is two-fold. First, she wants to keep undocumented people guilty of low-level crimes from filling up a jail meant for serious offenders. Second, she wants to guarantee that those in Travis County's immigrant community feel comfortable reporting crimes regardless of their immigration status. She worries that without those safeguards, few undocumented residents may ever to interact with law enforcement trying to prevent or solve local crime.

“The public must be confident that local law enforcement is focused on local public safety, not on federal immigration enforcement,” Hernandez said in the video. “Our jail cannot be perceived as a holding tank for ICE or that Travis County deputies are ICE officers. This is why everyone in Travis County will be treated the same under the law."

Abbott thinks this is a fireable offense; Hernandez has yet to respond to the governor's threat.

San Antonio is, by definition, not a sanctuary city. Every person booked in the Bexar County Jail is fingerprinted through federal system that will alert ICE if they're undocumented. It's then ICE's job to tell the county if that person is worth picking up. Bexar County Sheriff Javier Salazar has made no indication he'll change the way jail officials currently work with ICE.

San Antonio Police Department spokesman Jesse Salame, however, has said that while the city doesn't explicitly call itself a sanctuary city, "officers do not ask for proof of citizenship for people we encounter."