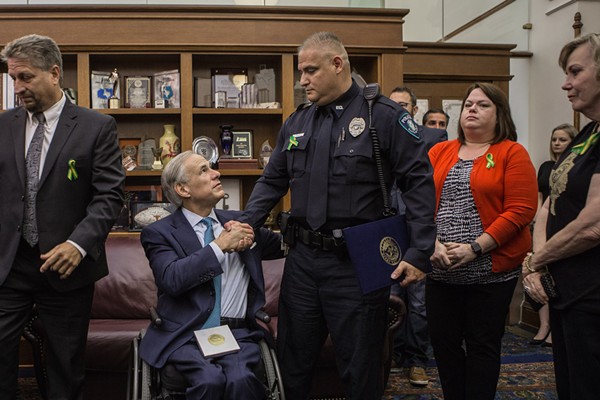 Well, that was quick.

Fresh off his three-day roundtable on how to prevent mass shootings in Texas classrooms, Gov. Greg Abbott tomorrow will unveil a new school safety plan, his office says. In the morning, the Gov meets with media at the Dallas ISD headquarters, and in the afternoon he'll do the same at the Hays County Law Enforcement Center in San Marcos.
Abbott called last week's roundtables in response to the 10-fatality shooting at Santa Fe High School, inviting victims, parents, cops, school officials and other experts to weigh in during sessions closed to the media.

Abbott's office had no immediate comment on the nature of his new plan, but the governor last week shared suggestions that came out of the first roundtable — more counselors, more metal detectors and more training for teachers to carry guns, among them. Notably absent from that briefing was any mention of stricter controls on firearms. (Austin's KUT radio ran a full list if you want to check for yourself.)

It remains to be seen whether Abbott, who enjoys an 100 percent approval rating from the National Rifle Association and ran with its endorsement, is willing to endanger that relationship by dropping the "G" word tomorrow.