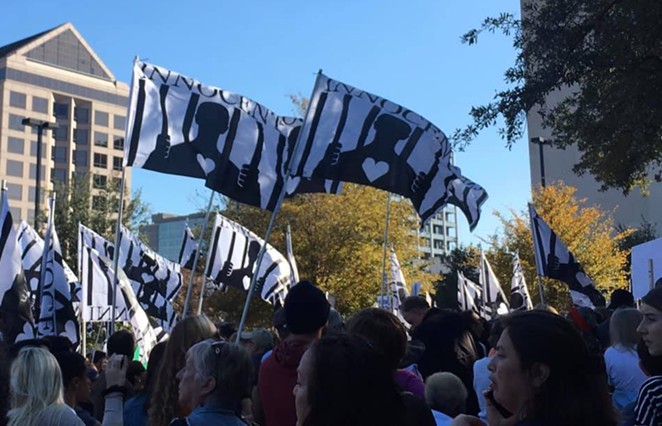 More than 2.7 million people have signed a petition asking the State of Texas not to execute Rodney Reed on November 20, and hundreds gathered outside the governor's mansion in Austin over the weekend to rally for his release.

Celebrities such as Beyoncé and a bipartisan group of politicians ranging from Democratic presidential candidate Elizabeth Warren to Sen. Ted Cruz, R-Texas, have also asked that the state consider new evidence that may clear the 51-year-old.
Despite the growing outcry, Republican Gov. Greg Abbott's most likely course of action is to follow the example of his two GOP predecessors and allow Reed to die, Southern Methodist University Political Science Professor Cal Jillson said.

"What both George W. Bush and Rick Perry did was to gut out the protests and allow the executions to take place," Jillson said. "They saw a benefit to going ahead with the executions, in that they were their displaying their Texas conservative bona fides. Abbott would be treading new ground if he was to call for a new trial, which I think he's unlikely to do."

Neither Bush nor Perry suffered long-term political consequences from those incidents. And Abbott, who won reelection last year on a 12-point margin, likely perceives that he won't either, Jillson added.

Reed is on death row for the 1996 rape and murder of 19-year-old Stacey Stites in Bastrop. His attorneys are seeking a new trial, saying recent witness accounts and a raft of new evidence — including a jailhouse confession by another inmate — exonerate him.

Even so, Jillson said Abbott will likely weigh the adverse national publicity of executing Reed against the potential damage to his standing with Texas conservatives if he issues a stay. The governor, after all, has been a frequent cheerleader for the death penalty, calling it "Texas justice."

In his five years as governor, Abbott has overseen the execution of nearly 50 prisoners, only once sparing a condemned man — in that case, after a victim’s family requested it. Indeed, more than half of the 25 prisoners executed in the U.S. this year were put to death in Texas.

"I think Abbott's going to perceive that any backlash is going to last days or weeks and that he's got the ability to wait it out," Jillson said.