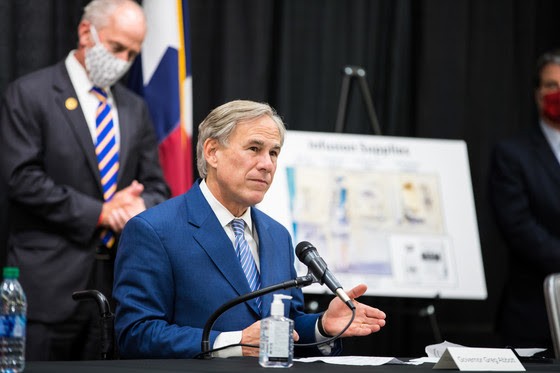 At a Monday press event, Texas Gov. Greg Abbott trumpeted that the state was over its bumpy rollout of COVID-19 vaccinations and pledged that it would soon be inoculating 50,000 residents daily.

Officials are setting up 28 "vaccination hubs" around the state to streamline the process, he added.

No one is rooting for the rollout to fall short, especially not as Texas this week became the second state to surpass 30,000 COVID-19 deaths. However, critics say Abbott's failure to deliver on his big promises earlier in the pandemic are reason to be skeptical.

Despite Abbott's repeated pledges for a quick rollout of test sites early in the pandemic, Texas consistently ranked near the bottom of U.S. states in testing per capita. Nearly a year into the health crisis, the state still ranks ninth from the bottom, according to a Johns Hopkins University analysis.

The Republican governor also faced criticism for easing pandemic restrictions before testing was widely available. On May 2, the day after Abbott announced a slate of business reopening, just 1% of the state's total population of 29 million had been tested, according to the independent COVID Tracking Project — a number far short of health experts' recommendations.

"If this pandemic has shown us anything, it's that Abbott's not good at keeping promises," said Wesley Story, communications manager for watchdog group Progress Texas. "We can't afford another repeat of 2020."

During the course of the pandemic, critics have accused Abbott of dragging his feet on issuing a mask mandate, engaging in pointless turf wars with municipal officials and making erroneous claims about the state's progress in battling the spread of COVID-19.

Since COVID-19 vaccines began arriving in the Lone Star State four weeks ago, some 877,000 Texans have been inoculated. The state's hands-off approach left local providers floundering and stymied the process, medical experts argue.

Even so, Abbott struck an optimistic tone during Monday's presser at Arlington's Esports Stadium, one of the touted vaccination hubs.

“Never before in the history of this state has Texas vaccinated so many people so quickly, “ he said, according to a Texas Tribune report. “It’s stunning to see what we've accomplished.”

Critics say they hope Abbott's public statements show the state is finally turning the corner. After all, the rollout comes at a desperate time. At least 13,397 COVID-19 patients are being treated in Texas hospitals, where they occupy more than one in five of available beds.

"The question we need to be asking right now is why this rollout has gone so badly so far and why the state hadn't been prepping for it months ago," Story of Progress Texas said.