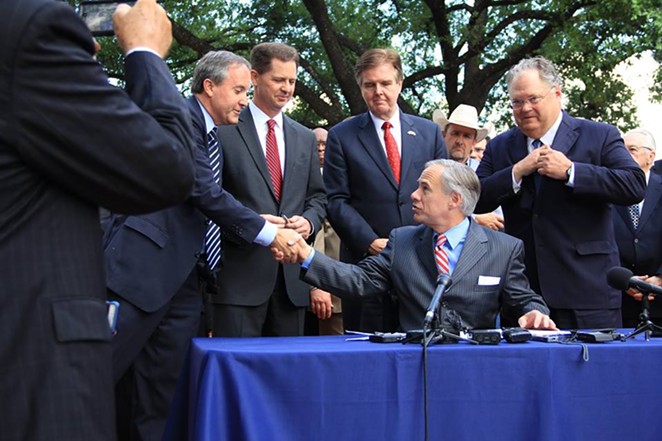 You're hearing it more and more: The Supreme Court could overturn state same-sex marriage bans, like the one in Texas.

And Governor Greg Abbott is prepared to protect the state's pastors from performing same-sex marriages — sort of.

"Freedom of religion is the most sacred of our rights and our freedom to worship is secured by the Constitution," Abbott says in a statement. "Religious leaders in the State of Texas must be absolutely secure in the knowledge that religious freedom is beyond the reach of government or coercion by the courts."

That coercion he is referencing is probably a Supreme Court ruling that says same-sex marriage bans are unconstitutional.

"Today I am proud to sign into law SB 2065 — the Pastor Protection Act — to ensure that clergy in Texas cannot be forced to violate their religious beliefs," Abbott says in his statement.

No one is trying to violate anyone's religious belief as there are plenty of pastors who are willing to perform same-sex marriages.

Rep. Celia Israel, a Democrat from Austin, said she'll marry her longtime partner in Texas one day and that preachers who don't support her marriage shouldn't be worried about her contacting them about conducting a ceremony, according to the Texas Tribune.