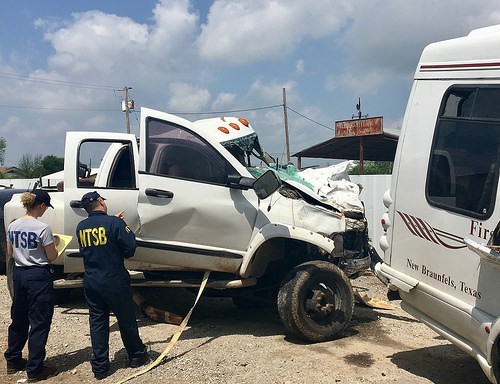 A Uvalde County prosecutor will present evidence to a grand jury Monday, June 19 regarding the March bus crash that killed 13 elderly members of a New Braunfels church.

The case centers on Jack Young, the 20-year old man whose pickup truck drifted across the yellow center line of U.S. 83  road on March 29 and plowed into a small oncoming bus. The bus was transporting 14 members of the First Baptist Church of New Braunfels' choir group home from a Leaky retreat. Only one bus passenger — and Young — survived the crash.

Young told witnesses at the scene he had been texting when he swerved into the oncoming bus. Further investigation by the Texas Department of Public Safety revealed Young had taken a cocktail of prescription anti-depressants hours before the incident — and that he had a couple of half-smoked joints in his truck's console at the time of the crash.


The National Transportation Safety Board released a preliminary report on the crash in May, but does not state probable cause for the crash. The report does, however, note that Young's truck crossed U.S. 83's center line 19 times, crossed the solid white edge lines of the roadway 37 times, and entered the grass roadside at least five times before hitting the bus. This information was collected from a cell phone video taken by a witness driving behind Young, who called 911 to report his "erratic" driving behavior prior to the crash.

District Attorney Daniel Kindred, the county prosecutor for this case, told the San Antonio Express-News he won't make any court documents linked to the case public until an actual warrant is served.