The Alamo City likes to get its drink on, but going out for a good time need not revolve around getting tipsy. Whether you live a sober lifestyle or just don’t feel like powering through a workday hangover, here are some things to do to have fun during late-night rendezvous without setting foot inside a bar.

Bowling Alleys
Whether you go the cosmic route or not, bowling can be a solid choice for nights when you just want to goof around with friends. And we’re not talking about dingy alleys with putrid rental shoes. Bowl & Barrel (17619 La Cantera Pkwy., Suite 102) and Bowlero (13307 San Pedro Ave.), both offer a more upscale vibe, and they’re open until 2 a.m. on the weekends. For a more traditional alley, there’s AMF Ponderosa Lanes (2118 Goliad Rd.), Astro SuperBowl (3203 Harry Wurzbach Rd.), Bandera Bowling Center (6700 Huebner Rd.), Brunswick Zone Thousand Oaks Bowl (4330 Thousand Oaks Rd.), Main Event Entertainment (multiple locations, mainevent.com), Oak Hills Lanes (7330 Callaghan Rd.) and University Bowl (12332 I-10 W., Suite 10), all open until at least 1 a.m. on weekends. And, yes, there are drinking options for those friends in your group that want to down a pitcher of Bud Light.

Arcades
Go the geeky route and hit up an arcade next time you plan a night out sans booze. Diversions Game Room (9900 San Pedro Ave.) is filled with old-school arcade games and open until 2 a.m. every day of the week. On a less local (and pricier) note, Main Event Entertainment (multiple locations, mainevent.com) and Dave & Buster’s (multiple locations, daveandbusters.com) offer a wide variety of diversions. Of course, you can also hit up Slackers (multiple locations, slackers.com) if you’re down for arcade and bar games — just remember to skip the adult libations. 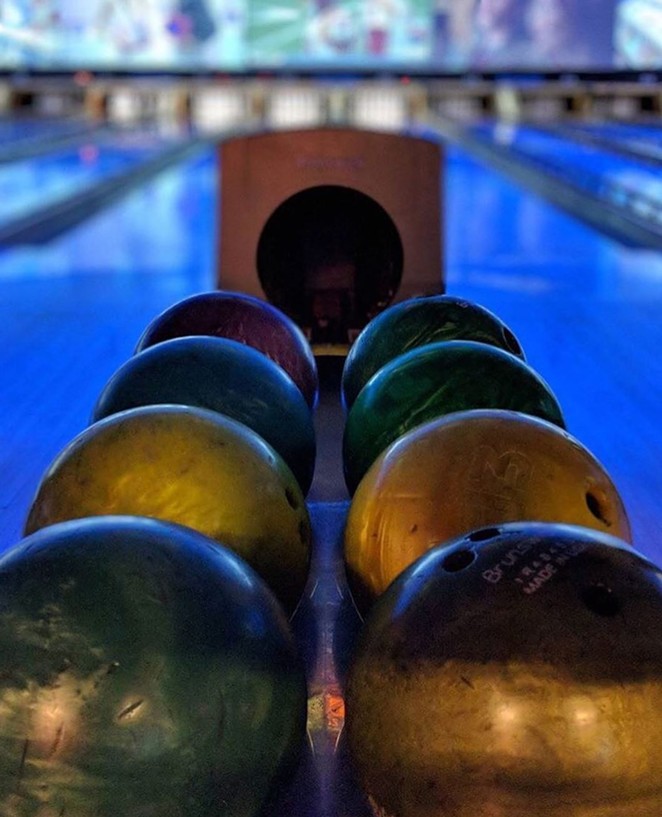 Bingo Halls
Hitting up a bingo hall on a Saturday night may sound like old folks’ version of a good time, but it can make for a fun experience with the right group of people with an appreciation for kitsch. The good news is that a number of bingo halls are open with late-night adventurers in mind. Bandera Late Night Bingo (810 Bandera Rd.), Ingram Late Night Bingo (6709 NW Loop 410) and Lucky Draw (1207 Richland Hills Dr.), are all open until at least 2 a.m. on Fridays and Saturdays.

Comedy Clubs
Although San Antonio recently lost its longtime Rivercenter Mall venue, there are still options for catching live comedy from local and touring acts. Hit up Blind Tiger Comedy Club (902 NE Loop 410), Jokesters 22 Pub N Grub (713 S. Alamo St.) and of course Laugh Out Loud Comedy Club (618 NW Loop 410) the next time you’re in the mood for the kind of laughs that won’t leave you woozy the next morning.

Escape Rooms
Escape rooms have popped up in droves over the past few years, giving thrill-seekers plenty of local options. While most are only open until 10 or 11 p.m., a few keep the sleuthing going into later hours. Found inside University Bowl, the late-night champ of escape rooms is Lock’em Up Escape Rooms, open until 2 a.m. on Saturdays and midnight every other day of the week, except Monday, when it’s closed. If your detective skills aren’t as sharp late at night, there’s always the Exit Game Escape Room (5720 Bandera Rd., Suite 23), open until midnight on Friday and Saturday nights. In Live Oak, Legendary Lockdown Escape Rooms (7505 N. Loop 1604 E., Suite 102) stays open until midnight on weekends.