Since way before San Antonio was one of the fastest-growing cities in the country, it had a proud history, peopled with interesting, important, idiosyncratic and ultimately impactful characters. The two lists below, while not exhaustive by any means, are meant to give an idea of the sheer diversity and scope of famous San Antonians and their achievements. As is the case elsewhere in this edition of City Guide, the Greatest Hits are those folks whose names and work should already be familiar to almost everyone. Meanwhile, the Deep Cuts list looks to shine a light on slightly lesser-known individuals, who have, nevertheless, made important contributions in their respective fields.

San Antonio-born comedian and actress Carol Burnett is television royalty for her own variety show and stint on the Garry Moore Show, both of which earned her various Emmys and Golden Globes. She’s also a celebrated film actor, a Tony-nominated Broadway talent, a Grammy winner (Best Spoken Word or Comedy), and a recipient of Screen Actors Guild, Mark Twain and Peabody awards for her career achievements.

Though born in San Saba, actor/director/screenwriter Tommy Lee Jones has made his home in San Antonio (Terrell Hills to be exact) for years. As one of the most beloved actors in the business, Jones has starred in such films as Coal Miner’s Daughter, The Fugitive, Men in Black, Batman Forever and No Country for Old Men, and been lauded for his roles in the iconic TV series The Executioner’s Song and Lonesome Dove. Jones is an Emmy-, Golden Globe-, and Academy Award-winning actor. He now dedicates much of his time to his screenwriting, producing and directing work. 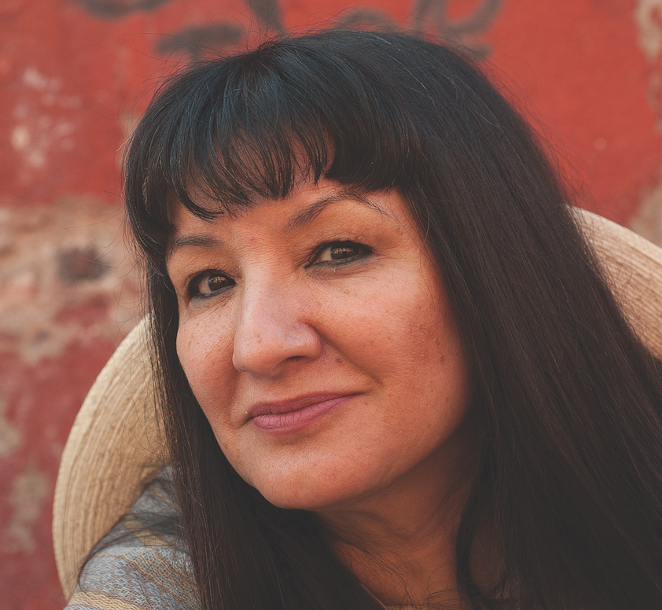 Often referred to simply as “La Sandra” by local publications, Sandra Cisneros grew up in Chicago — but, owing to her years spent living and working in San Antonio and to the way her writing speaks to and for the Chican@ community, we like to claim her as our own. Famous first for her heavily autobiographical prose works, including classics The House on Mango Street, Woman Hollering Creek and Caramelo, she is also a celebrated poet, teacher, community advocate and champion of the literary arts. She is a PEN/Nabokov Award, National Book Award, National Medal of the Arts and MacArthur Fellowship recipient (among many other honors). The literary foundation that she started, the Macondo Writers Workshop, still operates in San Antonio.

From her early days as a Broadway chorus girl to the height of her Hollywood stardom, which rivaled that of peers like Greta Garbo and Norma Shearer, San Antonio-born Joan Crawford was an unstoppable force. Admired by the likes of F. Scott Fitzgerald, sought after by an array of rich and (sometimes) talented men, Crawford was a fiercely independent woman who played the game on her own terms. Her biggest films include Mildred Pierce (for which she won an Academy Award in 1946), Possessed, Sudden Fear and Whatever Happened To Baby Jane?

Often referred to as the King of Country music, George Strait was born in nearby Poteet and has lived in or around San Antonio most all of his life. Known for helping make country music a mainstream powerhouse, Strait has sold over 100 million records worldwide and has more No. 1 hits than any other artist, in any genre, ever. Everything the man with the golden twang touches seems to turn to platinum.

Born and raised in San Antonio, filmmaker Robert Rodriguez is one of the most successful and beloved Mexican Americans in the film industry. His films, known for their violence, dark humor and groundbreaking technical innovations, include El Mariachi, Desperado, Sin City, From Dusk Till Dawn and Machete. Rodriguez approaches his filmmaking in a holistic manner, often doing almost everything, from cinematography and camera work to direction, production, editing and scoring himself. In this manner, Rodriguez’s films can be said to be uniquely his own in a way that other filmmakers can rarely claim.

Certainly the (literal) biggest star on this list, retired NBA great Shaquille O’Neal moved to San Antonio with his family when his stepfather was stationed here. He excelled in basketball at Cole High School, leading the team to a state championship his senior year before going on to dominate NCAA hoops at LSU. His NBA accolades — like four championships, three finals MVPs, 15 All-Star nods and a 2016 election to the Naismith Memorial Basketball Hall of Fame (just to name a few) — position him as one of the best to ever play the game. Aside from his storied 19-season NBA career, Shaq is well known as an analyst on TNT’s Inside the NBA, as a rapper, as an actor and as a generally magnetic personality.

When your claim to fame is a toilet seat museum, how could you not be considered the shit? Such is the case for San Antonio treasure Barney Smith who, for decades, has collected and decorated old toilet seats, showing them at his Alamo Heights home by appointment. These aren’t just any seats, however, as the collection includes loo lids with historic value: including but not limited to Saddam Hussein’s toilet top, a lid decorated with bits of the Berlin Wall, one with barbed wire from Auschwitz and one signed by Spurs coach Gregg Popovich. Just recently, Smith sold his collection of more than 1,400 can crowns to a collector in North Texas. Though he spent decades on the collection, Smith, a former master plumber, is excited to see it go to a new owner, whom he hopes will help to preserve this odd and wonderful legacy.

Esteban Jordan (1939-2010)
Esteban “Steve” Jordan was an accordion god that played fast and loose with the unwritten rules of genre and (by extension) race. A conjunto and Tejano star in his own right, Jordan helped show how versatile his instrument could be, bringing his talents into the realms of fusion jazz, rock, blues, salsa and zydeco music. His legacy is undeniable and his influence is wide-ranging in terms of how musicians view the accordion’s potential.

One of the most important and influential labor organizers in U.S. history, Emma Tenayuca was born in San Antonio and spent most of her life here. She graduated from Brackenridge High School, got her Master’s Degree in Education at Our Lady of the Lake University and taught in the Harlandale School District. While she dedicated her life to teaching and advocating for social justice, especially but not only in the realm of labor, Tenayuca is most often recognized for her instrumental role in the Texas Pecan Shellers Strike of 1938.

Polly Lou Livingston (b. 1929)
First and foremost, Polly Lou Livingston is, and has been for decades, a joyous force in San Antonio and Texas society. A patron of the arts, a fashion icon and a delightful personality, wholly original to the core, Livingston has lived a life of more adventure and charm than most could imagine. Most recently, Livingston is known for her voice acting work, especially in the show Adventure Time, in which she voices Tree Trunks, a yellow-green pygmy elephant who is friends with Finn and Jake.

Bette Nesmith Graham (1924-1980)
Though typist and commercial artist Bette Nesmith Graham was born in Dallas, she was raised in San Antonio and graduated from Alamo Heights High School. Her son Michael Nesmith went on to stardom as a founding member of the Monkees, but her biggest claim to fame is as the inventor of liquid paper and founder of the original company that produced the still-important office product. She sold the operation to the Gillette Company in 1979 for nearly $50 million.

James Robert Cade (1927-2007)
While his legacy as the inventor of Gatorade, during his time as an assistant professor at the University of Florida, leaves most to associate him with the Sunshine State, physician and research scientist James Robert Cade was born and grew up in San Antonio. At Brackenridge High School, Cade was a track star before going off to study at the University of Texas in Austin.

Julian Onderdonk (1882-1922)
It’s not hard to see why Julian Onderdonk, whose paintings adorned the Oval Office during George W. Bush’s years as its occupant, has been referred to as the father of Texas painting. In his short life, the landscape painter, adept at blending realism with Impressionism, studied under renowned American painter William Merritt Chase and produced a body of work that has become synonymous with the romanticized notion of Texas country life. He’s the guy who practically invented our collective obsession with bluebonnets.