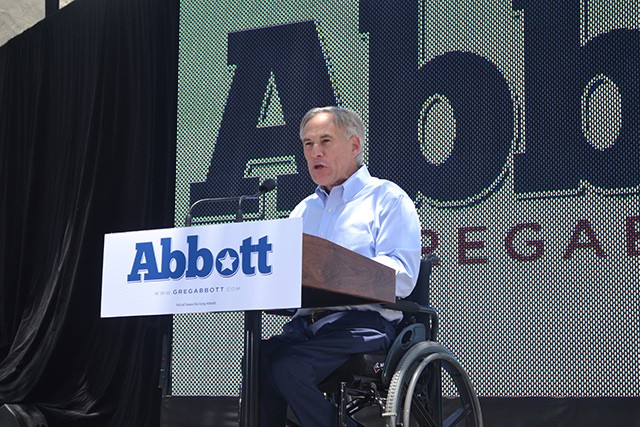 Last week, standing before a crowd at the HOLT Caterpillar plant in none other than San Antonio, Gov. Rick Perry announced he would step aside to “pass the mantle” of leadership, officially marking the end of his painfully long reign as governor. As if to give us one last reminder of his brand of politics, Perry staged the event at a dealership owned by a major campaign donor and recipient of lavish tax breaks. For a governorship that’s been criticized for its perceived cronyism and pay-to-play atmosphere, Perry, at the least, kept things consistent.

His unsuccessful, embarrassing run for president during the 2012 elections was marred by verbal gaffes and blunders, including an infamous moment during the Republican debates in which the Texas governor forgot the name of the third agency he would eradicate if elected president, leading him to say “Oops!”—a mistake that will eternally haunt his legacy. While he’ll surely be remembered for his national campaign missteps, Perry’s errors overall paint a much less whimsical portrait.

During his tenure as the longest serving governor in Texas history, Perry slashed education funding by $4 billion, appointed a young-earth creationist to oversee the Texas State Board of Education and promoted abstinence-based education in a state with a staggering teen birth rate. Despite the fact that Texas claims the highest number of uninsured residents in the country, Perry rejected billions in federal Medicaid assistance for some of the state’s poorest citizens.

And while he continually touts Texas’ job growth and attributes his leadership to the figures, Perry fails to mention the state leads in the number of people making less than minimum-wage. Perry will also be remembered for establishing the Texas Enterprise and Emerging Technology Funds—which watchdog groups like Texans for Public Justice write off as slush funds for cronies who return the favor with sizable campaign donations.

A foe to women’s rights, Perry gave his blessing to the legislature to cut family planning funding by two-thirds and recently vetoed an equal pay act. Fresh on the minds of voters, the conservative governor called two special sessions with the aim of addressing abortion regulation.

While he constantly professes his compassion for precious (unborn) life, more than 200 inmates have been executed during Perry’s governorship.

The list goes on. And on. And on. At one point the governor even verbally flipped off a news reporter with a—to his credit—culturally sensitive, “Adios, Mofo!” No surprise that was just one phrase of choice from Perry-weary Texans when he announced his time as governor was winding down.

But the Champagne corks barely had a chance to pop among Texas Democrats, progressives, and moderate Republicans hoping for a true change in guard. Just days later, Attorney General Greg Abbott threw his hat in the ring, confirming long-time speculation.

Like Perry, Abbott made it official in San Antonio, shamelessly pandering to Latino conservatives with a Spanish adage directed at a mostly white, mostly upper middle class-looking crowd at Plaza Juarez. More importantly, like Perry, Abbott regaled the crowd with his socially conservative policies—from his battle to include “One Nation Under God” in the pledge of allegiance to his fight to keep a statue of the Ten Commandments on the Capitol lawn and his ongoing promotion of strict anti-abortion laws.

He offered to cut down on higher tuition costs, crack down on the “porous” Texas-Mexico border and rein in state debt. But don’t expect Abbott to call the feds for any assistance. His career hallmark centers around going after the Obama administration—for sport at this point, it seems.

Abbott bragged about lodging 27 lawsuits against the federal government. He’s gone after the Environmental Protection Agency to oppose greenhouse gas emission and air quality regulations, the Affordable Care Act, and sought to impose Voter ID rules on Texans. He’s sued the government to exclude religious organizations from the ACA’s contraception rule and prevented Planned Parenthood from being part of a life-saving Medicaid program that serves low-income women, according to a list compiled by The Texas Tribune.

Abbott even lightheartedly jokes about suing the federal government for fun: “I go into the office, I sue the federal government and I go home,” he’s jubilantly joked. Perhaps the punch line is the fact taxpayers are footing the bill—his fondness for litigious sport has cost citizens about $2.5 million in legal fees.

“We believe Abbott is like Perry but worse. It’s not just the continuation of the long Perry years, but an escalation of extremism,” says Tanene Allison, communications director with the Texas Democratic Party. “He’s spent an enormous amount of taxpayer dollars keeping Texans from being able to vote and he’s spent a lot of time defending redistricting boundaries that [are viewed as racist].”

Abbott mirrors Perry’s ideology, and has the legal record to prove it. With actual tact and poise, the thus far less gaffe-prone Abbott could very well be more detrimental to progress in Texas than his predecessor, if elected.

“He shares a lot of Perry’s politics, but is more extreme in his actions, which makes him as much of a threat to Texas values as the governor was,” says Allison. “He’s Perry 2.0.”

In the meantime, Perry remained coy about his presidential aspirations, saying only, “Any future considerations, I will announce in due time and I will arrive on that decision appropriately.”

If his decision doesn’t include another stab at the White House, the governor could just as easily go into the private sector, joining one of the dozens of lucrative businesses he helped subsidize while at the helm. Or he could join Fox News’ Obama-bashing pundit circuit as yet another attractive talking head with little brain power, a la Sarah Palin.

It’s hard to say at this point. But one thing that seems certain is that Perry’s professional chokehold on Texas politics has drawn to a close. Adios, Mofo.