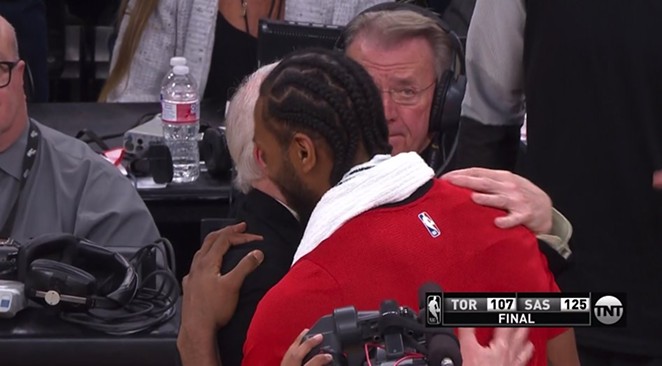 After the dramatic meeting between the Spurs and Toronto Raptors, in which San Antonio fans booed prodigal son Kawhi Leonard, Gregg Popovich said he felt bad that fans didn't give the former Spur a warm welcome.

Ahead of the game, Popovich said he hoped Spurs fans would be able to treat Leonard, who earned the Finals MVP in 2014, with respect and kindness. That didn't exactly happen, as the AT&T Center erupted in loud boos and chants of "traitor" and "Uncle Dennis" whenever Leonard had the ball.

While speaking to reporters, Popovich said he "felt badly" about how fans booed Leonard.

As for Leonard, social media users joked that the reserved star wasn't fazed by the negative attention. Plenty of other users couldn't help but troll the player.

During a post-game interview, Leonard told reporters that he wasn't surprised about his treatment by the fans. He said the media helped stir controversy and made the fallout between him and the Spurs franchise bigger than it actually was.

Still, Coach Pop and his former star were able to put the drama aside and have a civil moment following the buzzer. The two hugged before Popovich spoke to Leonard for a bit.

That long talk between Kawhi and Pop after the game was very dope... respect is still there after all that happened #Spurs #Raptors

Nothing but respect between Kawhi and Pop 🤝 pic.twitter.com/0p1EW2DScx