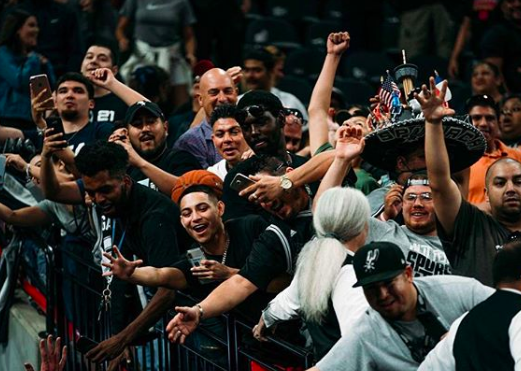 After limiting players' interactions with fans and members of the media and even throwing around the idea of having games without anyone in attendance, the NBA announced Wednesday that the 2019-2020 season has been suspended indefinitely.

The announcement came after Utah Jazz center Rudy Gobert tested positive for COVID-19, more commonly known as the novel coronavirus. Though Gobert was not physically with the team when his test results were confirmed, the sports league made moves to protect the players and fans. Initially, all Jazz players, as well as their Wednesday night rivals the Oklahoma Thunder, were removed from the court and the game postponed.

The NBA later determined all games would be suspended.

"The NBA will use this hiatus to determine next steps for moving forward in regard to the coronavirus pandemic," a statement from the league read.

"Like all basketball fans, I wish the NBA season could go on, but I commend the NBA for putting the safety of fans and players first," he told News 4 San Antonio.

Aside from the Spurs players, the suspension also impacts vendors, ushers, security teams and various personnel that work at the AT&T Center during games. The suspension could potentially have the same ramifications as the NBA lockout in 2011.

Online, many Spurs fans took the suspension as good news for the team, given its less-than-impressive record this season. Others joked that the Spurs wouldn't break its playoff streak.

The NBA needs to cancel the regular season so this Spurs season doesn’t even count!!!!

Spurs won last night. They are the NBA Champs. That’s how it works.

If Spurs not making the playoffs, then neither is anyone else. 😤

Does that mean we don’t miss the playoffs this season? pic.twitter.com/40gRbsH4AT

🗣 THE PLAYOFF STREAK IS ALIVE

Still, the suspension doesn't mean it's the end of basketball for the year. There's still a chance that the coronavirus pandemic could die down and the suspension be lifted. The NBA's statement doesn't clarify whether teams are restricted from holding practices or training.

During an appearance at a fundraiser dinner Wednesday night, head coach Gregg Popovich advised Spurs fans to rewatch old games in event of a hiatus. His comments came before the NBA's announcement.

"Just watch the ... who was the team we beat last night?" Popovich told the crowd. "It's been such a rarity I forget the wins. Just watch the Dallas game over and over if there's a hiatus. Don't watch those other games."