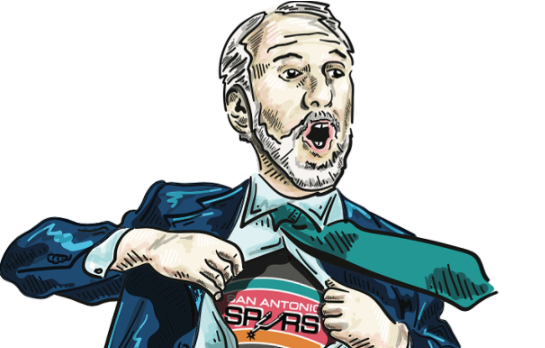 There’s little consensus among connoisseurs on when wines peak. Depending on conditions, some can be at their best five, 10 or 15 years after they’re bottled, and deciding what “best” even means can open up its own contentious debate.

The parallels don’t usually extend to professional coaching, where individual tenures tend to be short-lived and a coach’s few successes can be appreciated more objectively. If anything, their careers are made for savoring in the moment — before a locker room, fanbase or owner eventually sours on them.

Gregg Popovich, noted pinot-lover (and partner in Oregon-based A to Z Wineworks), isn’t your typical coach. His two decades on the Spurs sidelines have become the double-gold standard for excellence in American sports: five NBA championships, six Finals appearances, and 18 seasons of 50 or more wins. In that time, he has known when to adapt and evolve. He has fostered a team culture through both rigid character tests and caring, transactional relationships with his players. He has transformed his public persona from that of the self-effacing curmudgeon into an amenable voice of the people. His sustained success is tied to a quality that oenophiles seek out in their wines – complexity.

And while such nuance makes it difficult to properly compare one season to another, the case can be made that the 2016-17 Spurs, these playoffs aside, are one of his finest coaching jobs yet.

To appreciate what Pop has done, you have to start with last summer. Tim Duncan’s retirement left behind a void in leadership and in the Spurs’ defense, which the future Hall of Famer had anchored since 1997. While past his prime, he had remained an integral part of the franchise’s identity and allowed Kawhi Leonard to gradually come into his own as a superstar.

Shortly after the announcement in July, Popovich spoke in front of reporters, lump lodged firmly in his throat. His 15 unprompted minutes were much more a tribute to Duncan the person than Duncan the player, but they were also a testament to how much their achievements were intertwined.

“I wouldn’t be standing here today if it wasn’t for Tim Duncan,” Pop said.
It wasn’t just the Big Fundamental’s absence that was felt in the Spurs locker room, though. Beloved barista/power forward Boris Diaw was traded to the Jazz, Matt Bonner moved from the bench to the broadcast booth, and four other spots on the roster were vacated. The seven new players (including four rookies) Pop had to integrate to begin 2016-17 represented the most significant roster turnover he has yet experienced. A team that counted on continuity as one of its biggest strengths would be forced to come together on the fly.

For any other franchise, this may have been considered a transition year – a term given to the inevitable swoon experienced after losing so many key pieces. No one expected the Spurs to miss the playoffs, but many writers did envision them finishing behind not only the souped-up Golden State Warriors but the Los Angeles Clippers and Houston Rockets. The logic: this would be the year the Spurs finally took a step back.

How did they begin their “transition year”? By going into Oakland on opening night and blowing out Golden State, 129-100. It was an early statement win for a team that would keep them firmly in the elite conversation all season long.

The Warriors would bounce back from their opening-night loss, asserting themselves as the prohibitive favorites to win the 2017 title, but they did so with four 2017 All-Stars. Pop had but one (Leonard) in guiding San Antonio to 61 wins and the second-best record in the league by a sizeable margin.

Somewhere along the way, he would break the record for most wins by a coach with one team, surpassing Jerry Sloan’s 1,127 mark.

He did so by being vintage Pop, retaining the Spurs’ defense-first identity while remaining flexible in his decision-making. He put more trust in his young players, managed the aging bodies of Tony Parker and Manu Ginobili and shook up his starting lineup whenever necessary.

The last point is no small matter, as it ultimately involved asking San Antonio’s big summer acquisition, Pau Gasol, to come off the bench for the first time in his 18-year career. When Gasol fractured his hand in January, Pop tabbed the relatively unknown Dewayne Dedmon as his starter at center. And when Gasol came back, he found a more efficient role for the Hall of Famer to flourish in, coming off the bench as a floor-spacing three-point shooter.

His in-game tactics have been equally noteworthy. In “clutch” situations (games that were five points or closer with five minutes left), the Spurs had the best record in the league (29-14) and the highest net rating (21.5). Both are testaments to the team’s execution, as well as the coach’s play-calling and (forgive the pun) spur-of-the-moment adjustments.

Is this Pop’s most impressive coaching job yet? It’s hard to say. The answer is muddled by layers of burgundy-tinted subtlety and subjectivity. You could argue in favor of a number of seasons, each with its own virtues and high notes but few with this year’s germinal challenges.

What’s clearer is that, in his 20th season, the Spurs coach has taken an old adage about fine wine and aging and made it appreciably real. He continues to get better, no matter whom he’s paired with.