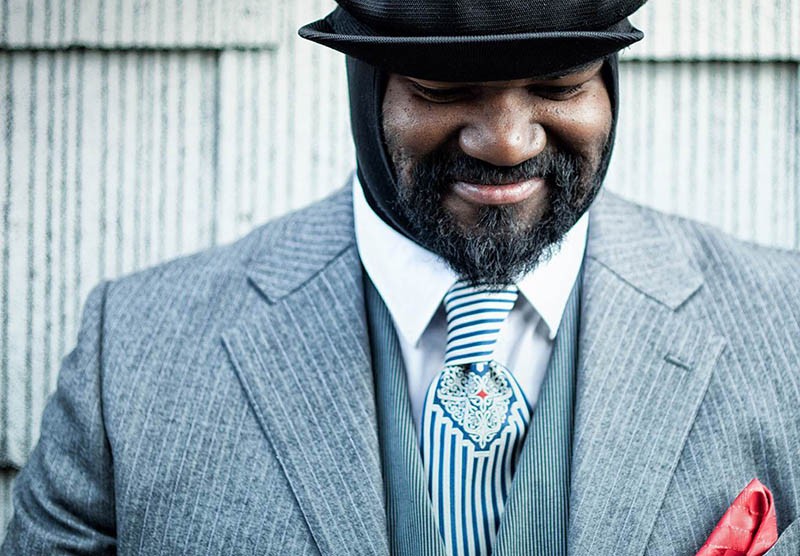 Which is more distinctive—Gregory Porter's impeccable style or the rich, polished tone of his voice? In classic suits with vibrant handkerchief accents and a signature Kangol Spitfire hat over a stocking cap, Porter is a jovial and unmistakable sight. When he opens his mouth, a suave baritone hops up and down over the melody. Like his look, it's a voice that you could pick out immediately in a lineup of male jazz singers, a crowd that's decidedly too small in 2014.

Either way, both his sartorial and singing styles are timely updates on tradition, with subtle and forward-thinking spins to his work. The son of a minister mother, Porter won a full-ride football scholarship to San Diego State, bailing on his athletic career after an injury to his shoulder. Thank the contemporary jazz deity for that, for Porter's three records—including the 2013 Grammy winner Liquid Spirit—have brought some much-needed attention to the genre.

Liquid Spirit won the 2014 Grammy for Best Jazz Vocal Album, though it easily could have won in the Gospel or Traditional R&B categories. His mother's church music influence blankets the title cut with an undeniable clapping backbeat, as the song's spaces just beg for a choir's backup. Wisely, Porter fills these spaces instead with the stomping jazz solos of pianist Chip Crawford.

On "Free," Porter and the band communicate with Gil Scott-Heron, the father of this amalgam of jazz and soul. But where Gil Scott told tragedies of the ghetto, Porter provides an opposite and positive perspective. As the band pops out a slow, Superbad lick, Porter sings of an industrious father and a mother who, "did just the same / Dropping love just like rain."

The cover of Billy and Gene Page's "The 'In' Crowd" might be the standout hit from the record. Over a fast popcorn shuffle, Porter exudes cool, detailing the merits of hip life. If it were a commercial, it'd be hard not to buy what Porter's selling. His rendition is easily the best take on this anthem of cool since pianist Ramsey Lewis pressed it as a boogaloo back in 1965.

Though it's not the most immediately catchy cut on Liquid Spirit, "Musical Genocide" most perfectly captures the mission of Gregory Porter. He sings of the blues, gospel and soul singer, expressing "love and pain" and the problems of the world as they're pushed to the margins of critical and popular attention. "I will not commit, nor will I submit to musical genocide," Porter croons. With the flowing and graceful power of Liquid Spirit, Porter is doing everything he can to right those musical wrongs.