Grilling Guide: 3 secrets to barbecue heaven (even with veggies) 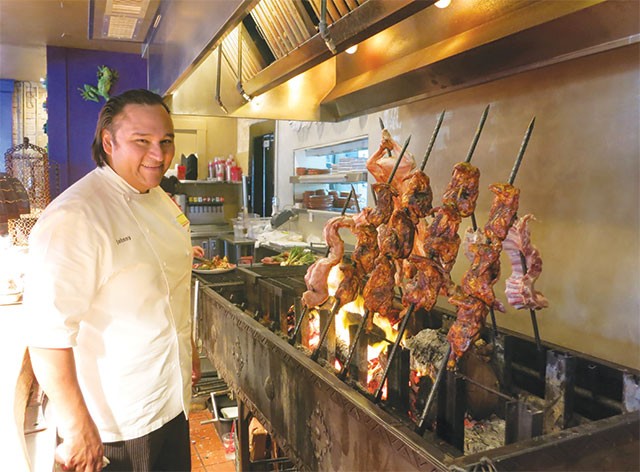 Just in time for Father’s Day, Fourth of July, summer or whatever other excuse you use to bust out the old barbie, the Current turns to some local grilling authorities for tips and tricks that’ll make your neighbors green with envy and weak with hunger.

Chef Johnny Hernandez of True Flavors Catering, La Gloria, The Frutería and, most recently, El Machito fame seemed an appropriate source for a meat grilling consultation. The chef shared his recipe for cecina beef, common to Yecapixtla in the central Mexico state of Morelos. Cooked over an extremely shallow grill, the lean cuts of meat used at El Machito (“American beef is very marbled,” Hernandez noted, “but our cuts of meat are very Mexican in style—there’s some marbling, but we cut all the fat off”) touch the flames.

Cecina Asada de Yecapixtla via Chef Johnny Hernandez
Start with a very thin (1/16 inch), lean cut of beef from the hindquarter of the animal. Rub the meat in olive oil, generously apply salt and leave it to dry for one hour in front of a fan. The slightly dry, salted meat “holds very well in the refrigerator for a day or two,” said Hernandez, “and continues to cure.” Cook the prepped meat over a shallow fire with high heat for 15 seconds on each side, and don’t be afraid to let the flames make contact.

For poultry-grilling wisdom, the Current turned to Chris Conger of the newly-opened Smoke Shack on Broadway. Conger’s favorite backyard cookout prep is beer-can chicken. “We don’t regularly do it in the restaurant yet,” he said, “but we’ll do it as a special in the future.”

Conger suggests using charcoal to start the fire and letting coals burn to a nice gray before adding wood chunks (he prefers pecan—“it gives a sweeter smoke flavor”). After the wood catches, split the fire into two parts, dividing it down the middle and pushing tinder to the sides of the grill. “Put your chicken in the middle over the indirect heat, otherwise when fat drips off into that fire it’ll flare up and burn the whole bird,” he warned.

Beer-Can Chicken via The Smoke Shack’s Chris Conger
Start your fire while preparing a rub of salt, granulated garlic, lemon pepper, cumin, paprika, diced onions and, for an earthy flavor, thyme. Open a canned light beer of your choice, remove (i.e. drink) one-quarter of the contents and add a spoonful of your spice mixture. Rub the 3- to 5-pound chicken with olive oil and remaining spices, then sit the bird upright on the grill over indirect heat with the beer can inside the main cavity, using the legs for stabilization. Cook for two hours at 300 degrees. Remove the chicken from the fire with tongs, making sure not to spill hot-ass spiced beer on yourself.

And finally, who better than Jose Cruz, Señor Veggie himself, to provide some plant-based insight to this grilling guide?

Grilled Nopalitos Salad via Señor Veggie’s Jose Cruz
Begin with four whole, young, bright green cactus paddles or nopales. Rub the nopales with olive oil, salt and pepper. Cut an eighth of an inch sliver off the perimeter of each paddle and then char over a hot fire for two minutes on each side, rotating it 45 degrees halfway through for some nice grill marks.

“If it were meat, we’d say we cook it to medium,” said Cruz. “We don’t want it fully cooked; we want a little bite to it, like you might treat a French green bean.”

Cool the cooked nopales before slicing and, in the meantime, begin roasting tomatoes, peppers (poblano or chile pasilla are recommended) and an onion.

Roast four tomatoes over an open flame just long enough to blister the skins, then remove from the heat and peel to reveal a cool, smoky flavor. Cut it in half and scrape out the seeds. Treat two peppers similarly—char until the skin bubbles, remove the seeds—but then take a little extra time scraping the cooked pepper with the back of your knife to remove any thin, papery membrane that might remain. Grill one onion, halved, until it’s soft and charred. Also, don’t rinse the cooked pepper—doing so removes some of the grill-given flavor.

Julienne the nopales and give the tomatoes, peppers and onion a rough dice before adding four tablespoons of fresh minced cilantro, tablespoon of garlic, a splash of lime juice and salt and pepper. Serve on chalupas, in tacos, on top of burgers or just about anywhere else.