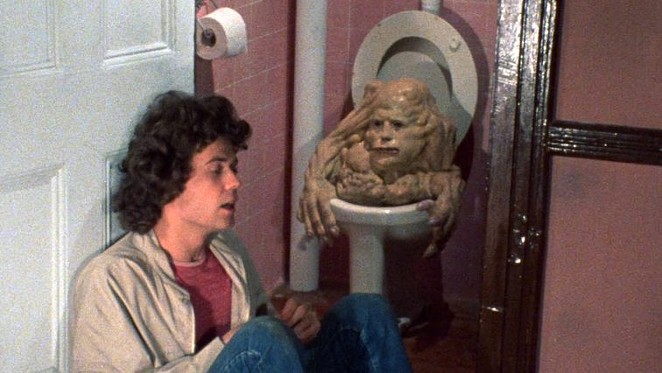 South Texas in general and San Antonio in particular still love themselves a good gore flick, and the month-long countdown to Halloween invariably multiplies our opportunities to catch them on the big screen. This year, though, we’re particularly lucky, as the recent re-emergence of cable TV’s philosopher-king of trash cinema Joe Bob Briggs is coming to town to screen a true cookie-tossing classic at Alamo Drafthouse Park North. If you weren’t fortunate enough to grow up with Joe Bob on the tube in the ’90s, now would be a good time to get acquainted.

Joe Bob Briggs’ alter ego is John Bloom, raised partly in North Texas and partly in Arkansas and, after graduating first in his class as an English major from Vanderbilt, a full-to-part-time Dallas resident thereafter (he currently divides his time between Grapevine and New York). Bloom started writing as Joe Bob in 1982, assuming the persona of a boisterous truck-drivin’ hillbilly to review genre films produced by schlock auteur Roger Corman. It also allowed Bloom to sublimate the careful criticism of his arthouse film writing beneath Joe Bob’s enthusiasm for grimy-ass exploitation movies, which he quantifies by gallons of blood, bounty of breasts and taxonomies of insane action stunts he suffixes with the qualifier “fu” (Quicksand Fu, Scalpel Fu, etc.).

After five years of columns, Joe Bob started appearing on screens himself, emceeing late-night horror movies on the Movie Channel (he made the move to TNT’s MonsterVision in 1996). Decked out in his finest Western wear and seated in his easy chair, Bloom drawled out analyses of drive-in detritus like Sleepaway Camp and The Legend of Boggy Creek for a generation of devotees collectively known as his “mutants.” When Job Bob signed off for the last time in the summer of 2000, it signaled the end of a special era in genre cinema.

As it turns out, the drive-in wasn’t destined to stay buried forever. Earlier this year, the horror streaming site Shudder started hyping a final return to form for Joe Bob, dubbed The Last Drive-In. Bloom was to don his bolo tie and saddle up in the Lay-Z-Boy for one last 24-hour rodeo. Thousands of mutants signed up for the ride; within minutes of starting, they crashed the site’s servers.

The streams caught up eventually, thankfully, and Shudder immediately put the whole thing on demand. Shortly thereafter, it was announced that Joe Bob would return for regularly scheduled programming in 2019. In the interim, Bloom is taking Joe Bob out to make the rounds, including a series of screenings at Alamo Drafthouses in Texas — most notable, this Saturday’s Basket Case screening and Q&A in San Antonio.

In many ways, Basket Case is the ideal Joe Bob Briggs flick. It was shot on and around 42nd Street (home to the grindhouses where many of Joe Bob’s favorites first ran) in the early ’80s, a time when it was totally plausible that you would see a grown man run down the street totally naked (which happens once in the movie) or blood spurting from multiple people (which happens many times in the movie). A 4K restoration just makes the film’s grunginess more pronounced.

It’s about the last place you’d expect a character to read a lengthy excerpt from Shakespeare’s The Tempest, even less that the Bard’s prose would foreshadow what happens to an anti-hero that looks like a squashed octopus. But that is exactly what happens in the saga of Duane and Bilal Bradley, Henenlotter’s forcibly-separated Siamese twins, and it’s the sort of greatness that can get lost in the more visceral pleasures exploitation offers. Joe Bob says check it out.