Group collaboration leans on symbolism, gesture in message of isolation 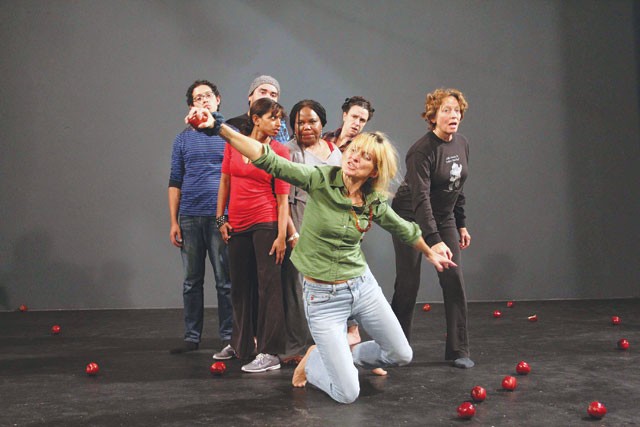 It’s eight o’clock at night at the Sterling Houston Theater at Jump-Start, and the cast of “Stranger” is in dress rehearsal. The world-premiere opening is days away and tonight the actors are working for the first time without scripts. They move rapidly through the scenes, only stopping now and then for director Viera Dubacová to adjust the blocking or for the play’s dramaturge, Milan Zvada, to urge the players to pick up the pace. After two hours of action they call a pause. The news is good. “This is no longer a work in progress,” Zvada tells the actors, “this is now your play.”

Dubacová and Zvada are members of Divadlo z Pasáze (Theatre from the Passage), a community-based theater from Slovakia with a unique charge — for 15 years the company has worked with actors who are developmentally challenged. They first visited San Antonio in 2009 touring their play “Protected Territory.” Now, they are collaborating with Jump-Start Performance Company in a new production.

Before the Slovakian actors arrived three weeks ago, Zvada was here working with the Jump-Start crew, offering themes and inspiration, as the actors discovered their characters and began to improvise scenes. Notes and comments on the progress were sent by email to Slovakia, as both companies simultaneously co-wrote the play, a process wherein, says Dubacová, “everyone involved is an author.”

The resultant work is “Stranger,” which Dino Foxx of Jump-Start describes as being “about the Other in all of us... the innocence that we have lost, and about the unknown which we discover day by day.” Though the Slovakian and Texas actors don’t share a single language — English, Slovak, Czech, Spanish, and Spanglish are heard on stage, sometimes simultaneously — words seem to have no more import than other sounds, like “whoosh!,” uttered to move the action along. Much of the action happens through improvisation, with “bodies, voices figuring out organically how the story sounds, how it looks,” Dubacová says. “It is like many small creeks flowing into a large river and flowing to the ocean. However,” she cautions, “there is no resolution.”

“Stranger” starts with the abstract, peaceful image of pairs of silent actors turning about, each couple balancing an apple between their backs. “It is,” says Zvada, “an image of tabula rasa. Everything is OK.” Then an old man with a white beard (played by Robert Rehm), moves ominously across stage, frozen in a wheel chair. The apples fall, roll on the floor, and are avariciously grabbed up amongst tumultuous games. (Is this Eden? The old man the demiurge?) As the action unfolds, more biblical references are added. The tower of Babel and the dance of Salome are mixed with mentions of Wall Street, but this is no psychologically driven narrative. Instead, the play is a series of highly visual actions. Ensemble choreography moves like dance theater, to give way to individual, sometimes impromptu, improvisation. The result — as if symbolism had lept 200 years back to William Blake, then jumped past German choreographer Pina Bausch via a bit of Stanislavski’s method — is emotionally charged, and highly effective. But the work itself, and the collaborative process of making the thing, says Dubacová, “is highly fragile.”

During break, before the next run-through, Zvada remarks that he is leaving the next day. As dramaturge, he plays the part of instigator and coach. But now the group process has gelled into a play the cast and crew can proceed with on their own. He mentions that many of Divadlo’s actors have been with the company for a long time; one actor who constantly stole scenes during the first run-through is Janko Kinceš (known as Johnny). He has a contagious presence and has been with the company from the start.

“The actors of Dividlo,” Zvada reminds me, “are mentally disabled, and would be in an institution if not for the company.” As I start to respond, saying how good it is that the world can see their acting, he agrees, but adds cryptically, “Personal experience is not transmittable.”

Still caught up in the performance, his words have shocked me back to the disjointed everyday where, no matter how hard we project ourselves upon the world, we are never truly heard. I’m reminded that I’m a stranger, too. •