When Matthew Hileman went to file a LGBT-related complaint in January 2014 under the city's newly amended Non-Discrimination Ordinance — the city's first — there wasn't even a form to fill out.

"I was really frustrated ... it seemed like the cogs on the machine were going together in the wrong direction," Hileman told the San Antonio Current last week. "There were not actual instructions on how to build the machine, so we were just trying to piece this together the best we could."

Hileman, who is trans, filed the complaint three months after City Council voted to amend its 21-year-old NDO to include protections for gender identity, sexual orientation and for veterans.

That was two years ago this week. The debate over the ordinance was divisive, as it was at AT&T, where Hileman worked back then. As San Antonio publicly weighed the merits of equality, Hileman's co-workers allegedly threatened violence against trans people and left a sign that said "no fags" at his desk.

Hileman has since reached an undisclosed settlement with AT&T and has moved on with his life, but his experience with the complaint process revealed that — at the time — the updated NDO was nothing more than words on paper.

And apparently, not much changed since then. The ordinance turned into a political beach ball bounced around by mayoral candidates seeking votes from the LGBT community.

Candidates Mike Villarreal, Leticia Van de Putte and Ivy Taylor all said maintaining the ordinance and improving it would be on their to-do list, though Taylor called the it a "political stunt" during a debate. She later apologized.

Mayor Taylor's office did not respond to repeated requests for comments on where the NDO stands today and her future plans for enforcement.

In March, Taylor announced a future new Office of Diversity and Inclusion, which would serve as a central clearing house for all-things NDO.

She made good on the proposal and last week, as the Current first reported, Kiran Bains was hired to lead the new effort. The city did not respond last week to repeated requests to confirm Bains' hiring, other than to say that the position had been filled.

Additionally, the city did not respond to a separate request on how many complaints have been filed under the amended NDO.

Robert Salcido, a well-known LGBT activist who was part of the hiring committee for the new post, told the Current that Bains was the one selected.

It will be a "centralized location, not only for complaints specific to the gay and transgender community, but all protected classes," Salcido explained. 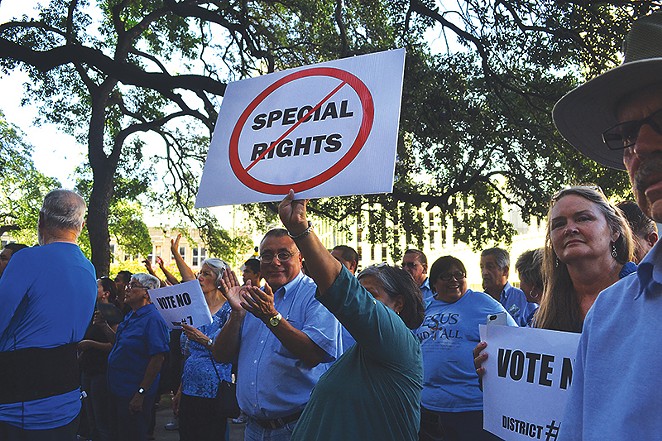 The office is of note because when the ordinance was amended in 2013, there wasn't even a link on the city's website about it or a reporting mechanism.

"Of course, it's still in infancy stages," Salcido said.

But we do know it won't be just about filing complaints.

"Right now, there's more of an educational component, more community interaction so individuals know this is a resource from the city regarding any type of discrimination they feel they may have encountered," Salcido noted. He added that the office is scheduled to hold a community meeting in October.

While this is a step forward, Justin Nichols, Hileman's lawyer during the complaint process, lamented that not much has really changed since the ordinance was amended in 2013.

"The city attorney's office was the central intake. Intake is only one small piece of the puzzle ... what it really needs is an enforcement mechanism," Nichols said. "The ability to say you're going to be prosecuted."

The maximum fine for violating most city ordinances is $500.

"All we have is discrimination or denial of accommodations to LGBT people being the equivalent of running a red light or jaywalking until the state or federal government want to enact something with real actions," Nichols said.

So, basically, the NDO has no teeth and doesn't really effect change, Nichols concluded.

There are larger forces at play nationally when it comes to LGBT equality and San Antonio is just another spectator watching and reacting to a larger debate.

"It's not necessarily our city's fault," Nichols said. "They are doing as much as they can and their hands are tied to address the bigger problem."

There are no state or federal laws that explicitly provide protections from discrimination based on sexual orientation or gender identity.

As for Hileman, despite how tough it was to come forward and essentially become the face of SA's NDO issue, he has no regrets about filing his complaint. He also has some words of advice for anyone who faces discrimination.

"You're never alone. And there are folks around to support you throughout, whatever community you find yourself in," Hileman said. "You just need to reach out to them."