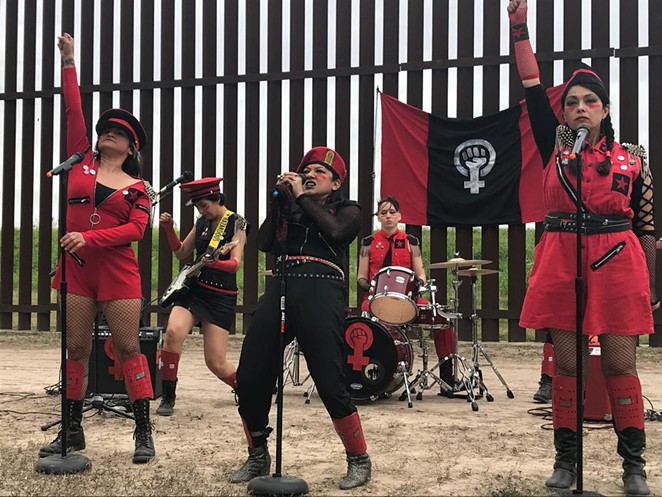 In her 2015 TEDxMcAllen Talk titled “Scaling Walls With Words,” acclaimed Tejana actor, writer, activist and spoken-word artist Amalia Ortiz compared her code-switching linguistic style to an unlikely mashup of Selena and the Sex Pistols — “like a dyslexic DJ ready to bidi bidi bomb the suburbs, punk ruca style.” She also referenced a quote from historian Howard Zinn’s book Artists in Times of War, which presents artists as catalysts who should “think outside the boundaries of permissible thought and dare to say things that no one else will say.” Taken together, those two tidbits offer a glimpse into the outspoken, genre-challenging spirit that runs through Ortiz’s diverse work, which encompasses three seasons on the HBO series Russell Simmons Presents Def Poetry, the NBC-approved poetry collection Rant. Chant. Chisme and a Tex-Mex remix of Georges Bizet’s iconic opera Carmen dubbed Carmen de la Calle.

An evolution of an MFA thesis manuscript Ortiz started writing before Trump’s election, The Canción Cannibal Cabaret & Other Songs functions as a multidimensional, multipurpose endeavor. Although firstly a collection of socially conscious, political poetry that doubles as a script for a punk musical, the forthcoming Aztlan Libre Press book is also a conceptual commentary on propaganda, a love letter to the DIY aesthetics of rasquachismo, a rebuttal of performance poetry’s questionable reputation within the ranks of academia and a “refugee, people of color, feminist, and LGBTQ+ call to action.” In the book’s introduction, Ortiz explains that The Canción Cannibal Cabaret is “more than a flat manuscript of text, but rather words which claim three-dimensional space.”

Set in a post-apocalyptic, “not-so-distant” future just after the establishment of a totalitarian government, The Canción Cannibal Cabaret centers around La Madre Valiente, an anti-colonial, anti-capitalist refugee secretly planning an intersectional feminist revolution with assistance from her roving emissaries, the Black Bards and Red Heralds. Human flesh, however, is not on the menu. Here the term “cannibal” refers to the cannibalization of “knowledge from before the fall of civilization” as well as Ortiz’s “homolinguistic” translations (essentially English to English reconfigurations) of songs and poems by the likes of Bob Dylan and late Chicana icon Gloria Anzaldúa — whose poem “The Cannibal’s Canción” sparked the project’s name. “If you enjoy Anzaldúa or Dylan, you might enjoy this,” Ortiz suggests.

In celebration of the book’s national release on July 27, the Guadalupe Theater plays host to a free book launch and a complete performance of The Canción Cannibal Cabaret, which Ortiz describes as a “deliberately theatrical” spectacle involving costumes, makeup, choreography, stage lighting, music and video.