Doug Stearns says he would have done exactly what his neighbor and friend Coty McDonnell did the night of October 23 — that is, pull an assault rifle on some suspicious-looking teenagers parked outside his house, jump in his truck and chase them to the end of the block, and then hold them at gunpoint until police arrived.

Stearns gathered on the front steps of the Bexar County courthouse Monday evening with a small group of supporters and gun rights activists who say the criminal charges filed against McDonnell over the incident present a threat to their Second Amendment rights. McDonnell's trial for deadly conduct, a misdemeanor charge, is scheduled to start on Tuesday.

"Coty should be praised for what he did, not put on trial for it," Stearns told the Current.

McDonnell was housesitting for Stearns, who had been out of town for a couple weeks, last October when he saw a silver Volkwagen Jetta pull up to the house in the far northeast side neighborhood. Converse Police Department records say that when McDonnell saw a couple of teenagers get out of the car, he ran to the garage and grabbed an AR-15 assault rifle, locked and loaded with a 30-round magazine. Police say one of the kids muttered "oh shit" when he saw McDonnell. The teenagers quickly jumped back in the car and took off down the block.

So McDonnell put his gun in his truck and chased after them. He apparently had backup. According to police records, one of McDonnell's neighbors jumped into his car and drove around the corner to try to cut the kids off. That's how McDonnell and his neighbor, according to police, pinned the teenagers in at the end of the block. The teenage driver of the Volkswagen told police that once the car was blocked, McDonnell got out of his truck, pointed his assault rifle at the kids inside and asked why they were "acting a fool on his street," according to police records. They thought McDonnell was going to kill them if police didn't show up soon. 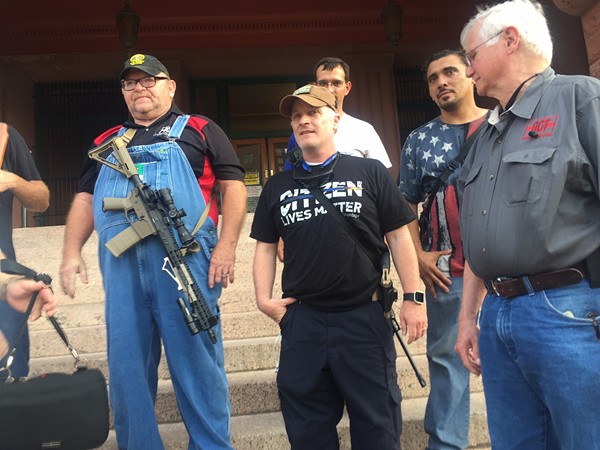 The teenagers later told the cops they were just looking for a party in the neighborhood and were stopping, switching drivers and turning around when McDonnell spotted them. Stearns scoffs at that explanation and argues the teenagers were "casing" his house. Converse police found a small amount of pot on the kids, some of whom were charged with misdemeanor possession of drug paraphernalia, issued citations, and then released. McDonnell was arrested for deadly conduct and unlawful restraint, a charge that was later dropped.

At the time, Converse assistant police chief Rex Rheiner explained the charges to us this way:


"When you go after somebody with a gun, you’re putting yourself out the window on that one. You have the chance to flee from harm and you’re basically creating a potentially deadly incident instead. ...when you go out there pointing guns at people, even if you have the right to carry under the Second Amendment, you don't have the right to break the law.”


Meanwhile, Stearns and others supporting McDonnell cite a uniquely Texan law that they claim justifies his actions that night. In Texas, citizens can use deadly force to prevent someone "who is fleeing immediately after committing burglary, robbery, aggravated robbery, or theft during the nighttime from escaping with the property." That same defense that got pushed to its absurd limit four years ago in San Antonio, when a jury acquitted Ezekiel Gilbert of murder in the death of 23-year-old Lenora Ivy Frago, a sex worker who met Gilbert, took his $150, for undetermined reasons decided she didn't want to have sex with him, and was then shot in the neck when she tried to leave with his money.

Police say the teenagers who stopped in front of Stearns' house last October didn't steal anything, and that they don't appear to have been planning any burglary.

Still, CJ Grisham, president the gun rights group Open Carry Texas, insists McDonnell's prosecution sets a dangerous precedent for people who cherish the right to protect themselves and their property. "There are those of us who take seriously the right to protect ourselves and those around us," he said standing outside the Bexar County courthouse Monday. "That's what Coty was doing, protecting his neighborhood and their property."

Grisham also argues McDonnell should be praised for his restraint that night. "He didn't shoot anyone," he said. "He should be commended for that."

Grisham added: "The police should not have a monopoly on the use of force."