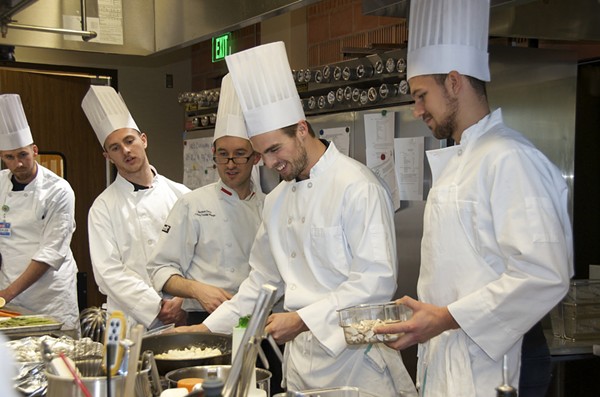 In the spirit of Thanksgiving feasting, eleven members of the San Antonio Rampage attended a cooking class at the H-E-B Culinary Academy. Chef Matthew Davis, Culinary Training Manager, along with assistant Caleb Carter, Culinary Trainer, led players through a condensed version of their “boot camp.”

Davis described the course as a “small touch base of all things you would experience at a culinary establishment.” His goals for the class were to give players cooking experience for the holidays, to teach them easy, healthy ways to cook. Davis gave high praise for his cooking pupils, saying that the Rampage is “one of the best teams out there.” He believed this holiday team building would help the players bond in a new way and hoped that the athletes would walk away more comfortable with cooking.

Head Coach Tom Rowe has greatly emphasized healthy eating this season, especially with such a young roster. A few players that I spoke with talked about how good nutrition improves their performance on the ice. “Protein allows me to perform better and have greater stamina,” Weegar said. Howden and Petrovic agreed that a healthy diet gives them more energy, with Petrovic adding that a large part of said energy comes from avoiding dairy products and fried food. The players participated in a similar activity this summer when they attended the Florida Panthers Development Camp. The team learned about healthy eating habits at a Whole Foods that the prospect camp visited. 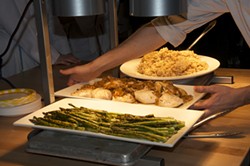 At H-E-B, Chef Davis suggested foods— like quinoa, kale and avocado— that Rampage players should incorporate into their diets to consume multiple types of protein. Animal protein is one of the types that Davis was referring to. Many Rampage players are Canadian and said BBQ was a Texan cuisine that is different from what they have at home. Basabara mentioned the popularity of barbecued meats in San Anto, and said, “I like it, it’s great for athletes.” The 4,000 calories a day that players consume must be high in protein for them to compete in intense physical and hard-hitting games. Basabara said that before a game he eats, “a small portion of lean meat, vegetables and rice. As an athlete controlling serving size is important; eating many small meals throughout the day.” But everybody cheats once in a while, particularly during the holidays; when these players do it is ice cream, pie, popcorn and chips that are their favorites to indulge in, and deservedly so with their great dedication to a pro-athlete lifestyle.

1. Dry chicken and season with salt and pepper.
2. Heat the oil and sauté the chicken until it stiffens slightly (no browning). Remove and reserve.
3. Add onions and garlic to pan, cover and sweat until the onions are translucent.
4. Add the flour to the pan and cook for 5 minutes, stirring frequently.
5. Add the wine and cook au sec, then add the chicken stock, bay leaf and thyme. Bring the mixture to a simmer and return the chicken to the pan, along with any released juices.
6. Cover the pan and braise the chicken until it is fork tender, about 35 to 45 minutes.
7. To finish the sauce, remove the chicken and keep warm, then strain the liquid and degrease. Add heavy cream, cooked mushrooms and pearl onions (optional), and simmer until the sauce has thickened slightly. Taste, season and adjust including a pinch of cayenne.

1. In a large pot, sweat the onions in some butter until translucent. Add the dry rice and stir to coat the grains. Cook for 1 additional minute to pearlize the rice.
2. Add a small amount of the chicken stock, and continuously stir over medium to low heat. When most of the liquid has been absorbed, add more. Do not stop stirring.
3. When the rice is properly cooked and creamy, fold in the Parmesan cheese (optional). Serve hot garnished with more Parmesan.