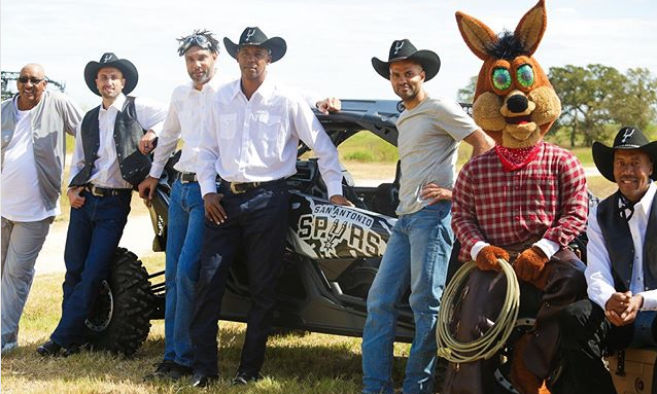 On top of the start of the regular season, Wednesday marks one of the best days of the year for Spurs fans.

Fans will find a lot to love about this year's TV spots, as the set of commercials includes Tony Parker's induction to the "Legends" and Bryn Forbes' addition to the star-studded lineup.

This year marks the 15th year that Spurs players have put their acting skills to the test. The collaboration began in 2004, when Tim Duncan made a solo appearance.

Two commercials are expected to air during Wednesday night's season opener: a "Cooking with the Spurs Podcast" and "Seafood Pirates," MySA.com reports. The former spot will star DeMar DeRozan, Rudy Gay, Patty Mills and the Coyote, who will be a "guest chef." In the latter, young Spur Bryn Forbes will make his commercial debut, joined by LaMarcus Aldridge, DeRozan, Gay and Mills. Forbes and Gay will even do their best pirate impressions.

"None of them are shy," H-E-B's vice president of marketing and advertising Cory Basso told MySA.com. "It's fun for them to be a part of the commercials because they get to share them with their fans."

Like in years past, Spurs fans have been able to enjoy behind-the-scenes look at the commercials thanks to social media teases from the official Spurs accounts and the stars themselves.

Having a great time showing the newly retired @_tonyparker09 the #SpursLegendsRanch on this year's #HEBCommercials. Awesome as always!

always a blast on set with @heb 😁 new commercials are coming soon!

all smiles on set with @heb 😁

While at the ranch I had the chance to meet the real GOAT! 🐐 Cutest ever! Wanted to take it home!! #HEBCommercials.

Welcome the newest member of the @heb Legends commercial!

Yesterday, we had a blast with @balapat, @rudygay, @aldridge_121, @demar_derozan, @brynforbes and @spurscoyote on set filming this year’s @spurs commercials! Take a peek in our highlight for some behind the scenes, and stay tuned on 10/23 (opening night) for the commercials on YouTube, Instagram & Facebook - and of course, on TV during the game. #GoSpursGo

Following the two commercials' debut during the game, fans will be able to watch all six new commercials on H-E-B's website over the next few weeks.