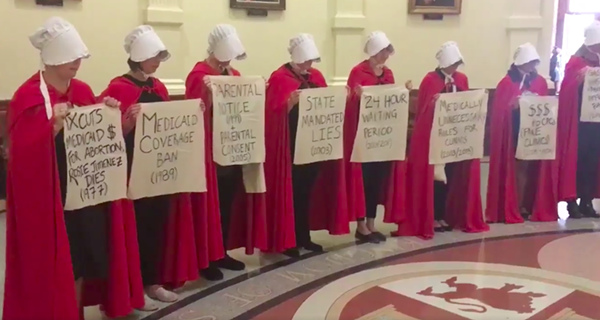 There's been no shortage of opportunities in 2017 to compare state and national politics to the dystopian 1985 novel The Handmaid's Tale.

The book, written by Margaret Atwood, follows a woman navigating a newly authoritarian government — where women's reproductive systems have become government property. Readers watch a familiar, democratic America devolve into a world where environmental toxins have left the majority of women infertile. It's punishment, the new leaders say, for female promiscuity and sinfulness. Those who can reproduce are forced to become breeding machines for the country's more powerful families.

Atwood's novel may paint a more blatant picture of reproductive injustice than what we're seeing in the White House and the Texas capitol building. But, according to the 77-year-old author, Texan woman are already living in a version of her dystopian fiction.

At a recent panel discussion at New York City's Book Con, an audience member asked Atwood where American was going when "it's virtually impossible for women to have an abortion in Texas." He's referring to Senate Bill 8, a newly-minted state bill that, among other things, effectively prohibits women from having an abortion after 13 weeks gestation. Researchers and advocates say that since it's mostly poor women who aren't able to access an abortion earlier in their pregnancy (because of the amount of money they must collect to afford the pricey procedure), it directly punishes low-income Texas women. Atwood agreed.

"It's really a form of slavery to force women to have children they can't afford and to say that they have to raise them," she replied.

Atwood said she's waiting for the right lawsuit to come along where a woman sues a state government, like Texas, for forcing her to have an unwanted pregnancy. The state, she said, should have to pay for the "whole process" — the prenatal care, the delivery, the woman's health insurance, the upkeep of a child after it's born.

"If you’re drafted into the Army, the other situation in which the state seizes control of your body, at least you get three meals a day, clothing, and a place to sleep," Atwood said. "So, if you’re going to do that to women, pay up.”

Texas' anti-abortion bills may result in "a lot of dead women and orphans," Atwood said. But it's already a reality in Texas, where the maternal mortality rate is the worst in the entire developed world and the foster care system is struggling to find homes for the 12,000 children currently in state care.

Listen to Atwood's entire response below.