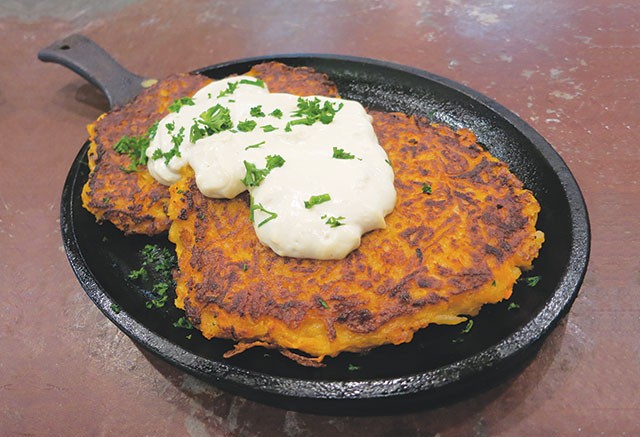 Hanukkah, the Festival of Lights–and food and drink–begins this year on the evening of Wednesday, November 27, and lasts through the evening of Thursday, December 5. The holiday, which has given rise to a host of culinary customs, celebrates the rededication of the Jewish temple and the Macabee victory over the Seleucids in the second century BC.

Tradition holds that after the Judean rebel group called the Macabees defeated the oppressive Seleucid Empire (a Greek regime that forbade Jewish religious practice), the warriors triumphantly reentered Jerusalem to ritually cleanse the temple. The Maccabees found only one sealed, uncontaminated jug of oil–enough to sustain the Menorah for a single day. Miraculously, the small amount of oil kept the lamp burning for eight days, long enough for more to be obtained. “Hanukkah celebrates the bravery of the Maccabees, but it’s also a holiday that celebrates religious freedom and the right to worship in peace,” explained Claudia Stokes, associate professor of English at Trinity University and member of Temple Beth-El.

For Ashkenazi Jews, those of Central and Eastern European descent, oil plays a central role in Hanukkah, as reflected in many of the traditional holiday foods.

Latkes, the quintessential Hanukkah food, are simple and delicious fried potato patties topped with sour cream or applesauce. Green Vegetarian will serve a sweet potato latke at their Thanksgiving meal, topped with a tasty vegan sour cream. Trader Joe’s sells frozen potato and matzo meal latkes, as well as those of the sweet potato variety.

Peel and finely grate the potatoes. Put them straight into cold water, then drain and squeeze dry, removing all starchy liquid. Beat the eggs lightly with salt, add to the potatoes, add in onions and matzo and stir well. Coat a frying pan with oil and heat. Drop spoonfuls of the mixture into the hot oil. Flatten the fritters and lower the heat. Brown one side, then the other. Remove and serve very hot.

The versatile potato pancake has been used in myriad ways, including in eggs benedict. Just add a poached egg, sliver of salmon and hollandaise sauce to the basic latke and voilà: Hanukkah brunch.

Sephardi Jews, whose roots trace back to the Iberian Peninsula, consume dairy foods during Hanukkah in a culinary nod to the story of Judith, a pious widow who saved her village from the invading Assyrian general Holofernes by feeding him salty cheeses, getting him drunk on wine, then later beheading him (Go Judy!). “For Sephardi Jews,” Brittany Power explained, “cheeses, quiches and cheesecake are often consumed during Hanukkah.”

Power is a professionally trained culinarian, caterer and cook who belongs to Temple Beth-El in San Antonio. She specializes in Sephardi and Mizrahi (Middle Eastern Jewish) cuisine and shared her recipe for an Italian ricotta cheese pancake called cassola.

Sift flour and combine with sugar, salt and baking powder in a large mixing bowl. In a second bowl, beat eggs and blend with lemon zest and ricotta. Slowly mix in dry ingredients. Coat a frying skillet with nonstick spray and place over medium heat. Drop batter from a spoon into the skillet. Cook until tiny holes cover the surface of the cakes, then flip and cook until set. Remove and put aside on paper-lined platter. Combine honey, orange flower water and orange juice and drizzle over cakes.

Jelly doughnuts, or sufganiyot, are another beloved Hanukkah food, particularly among Ashkenazi Jews. “Sufganiyot are an Israeli tradition that’s become popular here in the last 10 to 15 years,” said Stokes, “Some people who are really enterprising make them, but they’re available in many grocery stores during Hanukkah, too.”

Hailing from the Sephardi tradition, Power’s alcoholic concoction of choice for Hanukkah is sciroppa di vino, an Italian wine syrup served over ice with soda water.

Pour sugar and wine into a 3-quart saucepan over low heat. Stir until sugar dissolves, then add honey and stir well. Add cinnamon, cloves, orange zest and bay leaf and bring to a boil. Lower to a simmer then cook, stirring occasionally, until reduced and thickened. Strain the cooled syrup through a fine mesh and pour over ice with soda water or into bottles for storage.