Happy Hour Hound: Hits and misses at Market on Houston 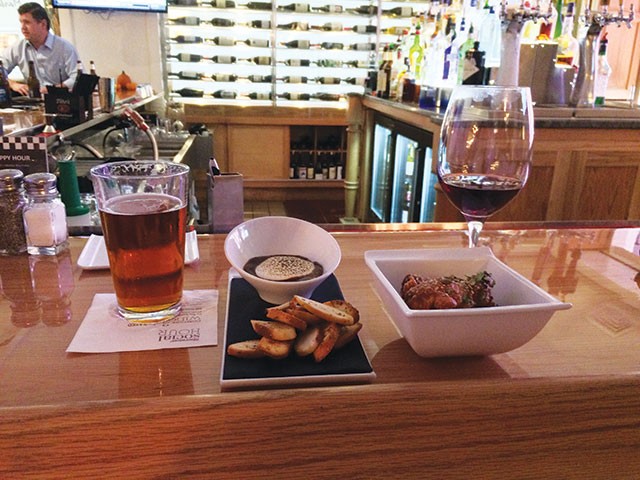 The redesign of the Sheraton Gunter this past April gave a bit of life to the hotel’s eatery. Now known as the Market on Houston, with an area that includes a deli line and sit-down restaurant, the eatery also includes a padded bar—no, really, there’s leather padding along the bar.

Happy hour, served from 4 to 7 p.m. is simple enough: $5 wine pours of house wine, $3 drafts and $6 Absolut vodka, plus $5 “foodie appetizers” or bar snacks Monday through Friday. While there are high tables scattered throughout the bar area, which also happens to have self-pour stations with several varieties of wine, the bar itself is the focal point. It could be the back wall, a glass- and bottle-lined area that commands attention, or the bar’s wooden details.

The beer list is decent. Of the eight taps available, craft enthusiasts could easily make do with a Shiner White Wing, Leinenkugel Orange Shandy, Deschutes Black Butter Porter or something out of Devil’s Backbone Brewing Company (sorry cider fans, the Woodchuck on tap isn’t on special). I ordered a Bob’s 47 Oktoberfest out of Missouri’s Boulevard Brewing Co. On the wine side of things, our bartender offered either a pinot noir or a chardonnay, with little details on origin or year to speak of (I would have bothered asking, but she really didn’t seem well versed or interested in such details).

The foodie appetizers, of which four were offered, were a bit of a miss. Jalapeño barbecue wild boar riblets, buffalo joes, honey-spiked Sriracha drummies and smoked mole are available, so we opted for the chicken wings (three to an order, so forget sharing) and mole. Although the wings had a crisp finish, they lacked the signature Sriracha heat, which was a bummer. The smoked mole on the other hand was hot and tasty, smoky with the addition of chipotle peppers and had a great dipping consistency. A charred dollop of goat cheese helped cool things off, but the only change we ended up suggesting was switching tortilla chips for the oregano-laced crostini.

The biggest draw is perhaps the anonymity available to the bar’s guests. A gaggle of business types chattered loudly; a couple drank whiskey neat out of tumblers (which they paired with chicken and rice from the restaurant); and my happy hour partner and I gossiped about the latest industry news. The lighting needs some work, but again, you’re not there to be seen (that’s what Lüke’s happy hour is for), you’re there to drink a few moderately priced brews, and maybe take in a snack or two.