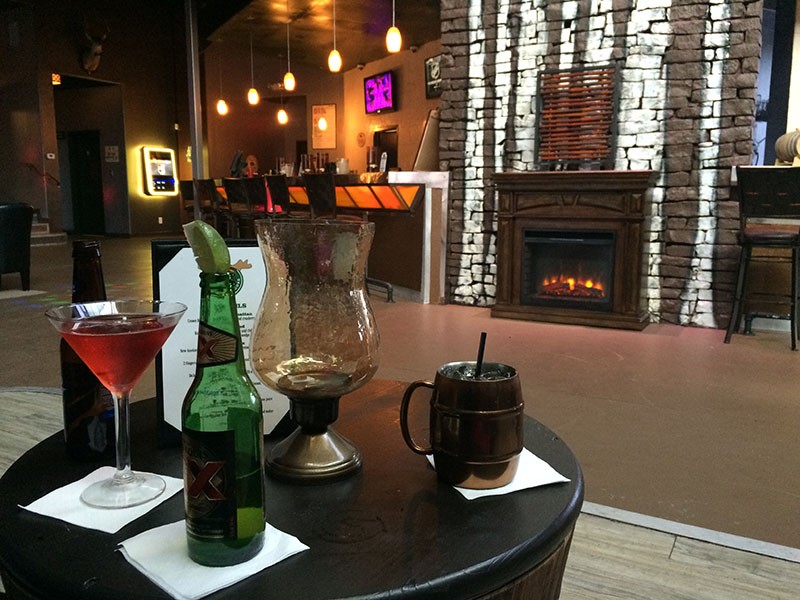 There's usually something to be said for 6-hour-long happy hours. For starters, who can go to these marathon affairs? Do people stay that long? How does one pass that time, exactly?

The Loose Moose Pub's happy hour runs Monday through Friday from 2:30 to 8 p.m. The bar's located next to craft beer-haven Claude Hopper's, in the same shopping center as Double Dave's Pizza, Heavenly Pho, a massage place and a hair salon, so there was definitely foot traffic though my afternoon visit last week was a slow one for the Moose, but that's not entirely for lack of trying.

My bar partner and I made our way to the Moose just as work ended (well, for the nine-to-five crowd). The bar itself comes off as a chic ski lodge or luxury cabin found in the mountains of Aspen. You wouldn't get all that from the bar's exteriors, which are almost too plain. Considering you could settle in for a lengthy happy hour, I'm thankful for the plush pillows emblazoned with hipster-looking anthropomorphic deer.

On the drink side of things, specials are standard. There's $2 domestics, $3 imports and $2.50 wells, though the bar's signature drinks aren't featured on the specials, which is a shame. The small menu of Moose Mug cocktails, aka copper tins for mules, changes up the usual Moscow Mule with iterations using Jim Beam products, Patron Silver, Crown Royal, and Tito's. My Spicy Moose, with Jim Beam Kentucky Fire was well built, though I should have known better than to order the cinnamon-heavy liquor.

Any guest with an aversion to mounted heads should be forewarned — there's a bespectacled moose over the bar's back wall and a few deer posted along the perimeter. To be fair, there's also a Big Buck Hunter arcade game in the side room.

We were joined by just a handful of bar-goers during the stay, so there was no elbowing to use the pool. I'm going to have to blame the tight space and necessary use of 45-degree angle to make the shots on my poor pool performance ... though my sub-par eye-hand coordination could also be the culprit.

Though The Loose Moose held its grand opening on February 27, it's still growing its audience. If you need a relatively quiet place to while away an afternoon, you could do a lot worse, though don't expect a rowdy welcome.