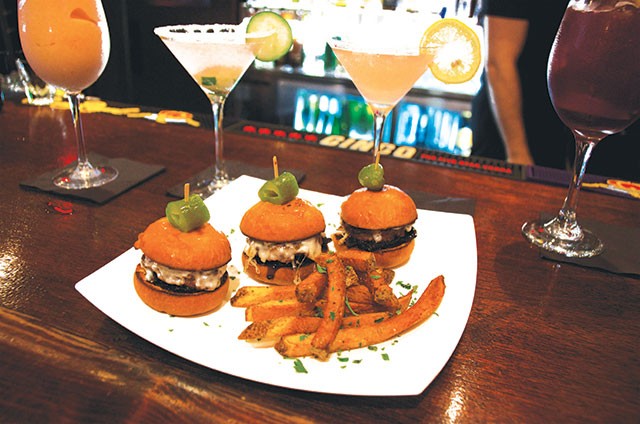 Tost Bistro & Lounge isn’t a place you go to because it made a top 10 list or was named a hot spot. It’s not that type of place. It’s never been a shining star or destination, but it was a great plan B–a place where I could always get a table and a pretty delicious meal. In its heyday, it was known for decent American fare, a lively bar and a raucous Sunday brunch.

Tost has gone through a few ownerships since Jean-Francois Poujol left to open Tribeca di Olmos; now, several owners later, the latest management is trying to rekindle the flames of what made Tost a solid dining and drinking option. They have their work cut out.

Let’s start with the ugly and work our way down, shall we?

The Ugly: The only cocktail listed was the sangria (Editor’s note: The bar’s happy hour drink menu changes daily, and there are drink specials on the weekend such as half-off martinis on Friday and bottomless mimosas on Sunday). So I dutifully ordered and watched as simple syrup was poured hand over fist into red wine. The result was cloying sweetness. While I love a sweet cocktail, this was like Kool-Aid with a healthy dose of brandy. My teeth still ache from all the sugar, and it was nearly undrinkable. Then again, happy hour runs 4-7 p.m. and 9-11 p.m. Tuesday through Saturday with $3.95 wells, $3.50 Buds, Coors Light and Miller and $3.75 Shiner Bock and Corona, so perhaps wells and bottled beers are a safe bet.

The Bad: The happy hour food specials offer standard fried fare—truffle French fries, calamari, chicken bites, personal pizzas and sliders ($5 during happy hour). Complimentary rolls came with bizarrely sweet butter. The rolls reappear during happy hour in the form of sliders. The brisket sliders were more like a meat puck surrounded by bread; the brisket a dense ball with little flavoring. Buffalo chicken sliders were an improvement, but were also overwhelmed by the large rolls. An acid and a crunch could have provided some kind of variation and improved the overall taste.

The worst were the truffle fries. Having had the fries at Tost before, I was looking forward to them. But what I got was a mound of underdone fries with the telltale petroleum smell of fake truffle oil. I’ve never had fries so raw in my life.

The Good: Are there redeeming qualities to Tost? Mostly that the bar was pretty empty these days, so if you’re looking for a place to watch the game and drink a Bud, it’s an option.