Har Mar Superstar will be bigger than Ron Jeremy, but not in the way you think 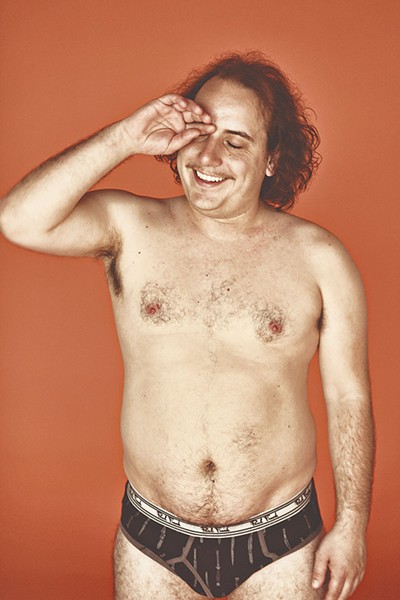 “How do they know what my body parts looks like?” he says, and then starts laughing uncontrollably. Why shouldn’t he? Bye Bye 17, his fifth album as Har Mar Superstar (Har Mar being a shopping mall in his native Minnesota) comes out April 23 and he’s currently on a national tour that will take him and his four-piece band to Limelight on Thursday. His over-the-top formula, which almost always ends up with him wearing nothing but his underwear, works. “Soon people will be going up to [Jeremy] and saying, ‘You’re like Har Mar Superstar,’ ’cause I’m gonna be way more famous than he ever will be,” predicted Tillman in the 2004 article in The Independent.

“It’s not just about shocking people, it’s about making it fun,” he told the Current. “I think people who call themselves entertainers should entertain, and that’s what I do. I think a lot of people don’t do their job.”

To be fair, the underwear part is only an aspect of his act, which includes costume changes, a little choreography, and is based on solid songwriting and singing ability.

“Me in my underwear is just the photos the people see at the end of the show, that’s where the show ends up,” he said. “I get in my underwear because I don’t want to ruin my stage clothes — I gotta play 60 shows in two months, man.”

But with Har Mar, you always end up with the music, and the soulful Bye Bye 17 is an instant attention-getter thanks to its vintage sound. The album was recorded in Austin at Spoon’s Jim Eno’s studio, and mixed in New York by Sean Everett and The Strokes’ Julian Casablancas, who released the album on his Cult Records label.

“First time I saw Sean was at [New York’s] Mercury Lounge years back, and I was blown away by his voice, his confidence and his showmanship,” said Casablancas in press materials. “He’s the man with the golden voice… Like the dude himself, the record’s just tough, sad, hilarious, and rad.”

Unlike the more electropop Dark Touches (2009), and The Handler (2004), which took you to ’70s Stevie Wonder, Bye Bye 17 is a vinylesque, Otis Redding-meets-Sam Cooke soul/R&B feast.

“I wanted it to sound like it was old, unearthed, like done in a garage on a VHS tape and dubbed like eight times,” said Tillman. “I take on different forms of R&B and I love them all.”

Coupled with his stage presence, song titles like first single “Lady, You Shot Me” and “Don’t Make Me Hit You,” infuse his act with shock elements.

“‘Don’t Make Me Hit You’ is actually more sweet than it sounds, the name is just to catch people off-guard,” he said. “The song is more about rough sex and how I don’t like it. It’s a ‘Don’t make me play your sex games ’cause I don’t have time for that’ kind of thing.”

Only time will tell whether Har Mar Superstar’s shocking shtick will overshadow Ron Jeremy, as he predicted in 2004. In the meantime, his flair for the dramatic can’t drown out his solid musical chops and clever lyrics.

“I don’t think I need the shock, but it helps,” Tillman said. “I’m not trying to be shocking for the sake of being shocking. After five albums people are beginning to realize that I’m not a joke, I’m not going anywhere, and I’ll continue to get better and better.”