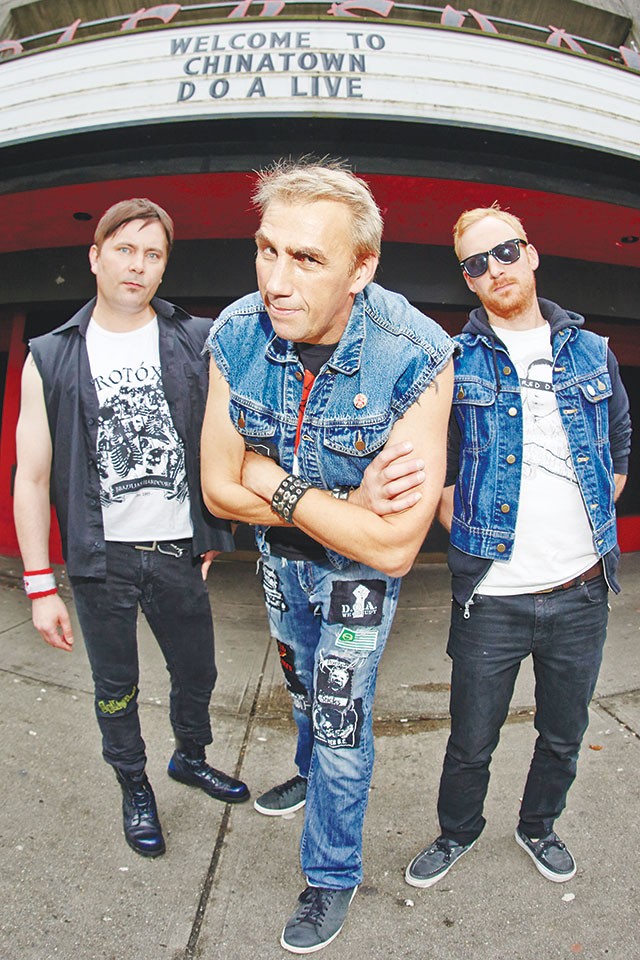 D.O.A. will be dead on arrival soon, but the band’s last few shows should be as lively as they ever were.

Last September, Canada’s influential hardcore punk trio released the stirring live collection Welcome to Chinatown (its third live album and 21st overall), and now the band is stopping at Limelight on Friday to say goodbye, at least for a while—frontman Joe “Shithead” Keithley is once again running for a seat in British Columbia’s legislative assembly. It will be the band’s first Texas show since 1999 and first SA date since 1998.

“The label [Sudden Death Records, Keithley’s own] continues and I’ll continue writing songs,” Keithley told the Current on the phone from Vancouver, BC, “but first things first.”

This isn’t just another punk band coming through town—Keithley (the only original member) and D.O.A. are widely viewed as the cornerstone of hardcore punk typified by ’80s bands like Dead Kennedys, Circle Jerks, Bad Brains and others known for a sound and attitude that blended punk’s DIY ethics and metal’s ferocity and speed. In those times, frequent destination Los Angeles was a home away from home for D.O.A., and when the band released the classic Hardcore ’81 and invited Black Flag to tour with them, the term stuck: D.O.A. “created” hardcore punk.

“Well…,” said a humble Keithley. “You can call us ‘progenitors’ of hardcore, in the sense we popularized the term. The idea of hardcore was [to] think for yourself, try to make some positive change and make your own rules without singing with a fake British accent.”

Once his musical legacy was firmly established, Keithley, a socially conscious environmentalist liberal, was determined to make a difference working within the system. In 1996 and 2001 he ran as a Green Party candidate and lost subsequent provincial elections, and in 2013 he almost got the nomination as a New Democratic Party candidate (Canada’s social democrats).

“The party pulled some dirty tricks on me at the last minute,” he said. “There was a candidate that didn’t speak his mind [Chris Wilson] and they realized I would, so there was pressure from the higher-ups in the party. But I learned a lot and this time I’m starting three years earlier.”

Keithley is well aware of the fact that 15, 20 or 30 years ago, someone with his background could hardly dream of running for public office (he authored a book titled I, Shithead: A Life in Punk, followed by Talk–Action=0, and he’s working on a third one). But times have changed, and that very same background is now an asset.

“The generations that started punk rock and DIY ethics have grown up … those are the people who respect my background, because what I did is also part of who they are,” he said. “I don’t expect someone who is 70 or 80 to go, ‘Oh, yeah, I get this. It’s that noisy crap I used to hear down the block.’ But in Canada, [my] fans are between 15 and 55.” And many of them vote.

I tell him I don’t believe anyone can really change the big picture. As George Carlin once said about America, “This country was bought and sold and paid for a long time ago.” And that, in my bitter opinion, applies to any country where money dictates which way the wind blows—that is to say, all of them.

“Politics is a dirty business [in Canada] just like it is in the USA,” he said. “It’s still bought and sold, parties take contributions and people owe favors to those who support them, there’s no denying that. The thing is: You still need to have some fresh blood in there that hasn’t grown up in the system and hasn’t been a part of the system … I don’t think you can completely give up on the system, so I’m trying to get in there to change it.”

In a way, it’s a win-win situation. If candidate Keithley succeeds, he’s convinced things will change in Canada. And if he loses?