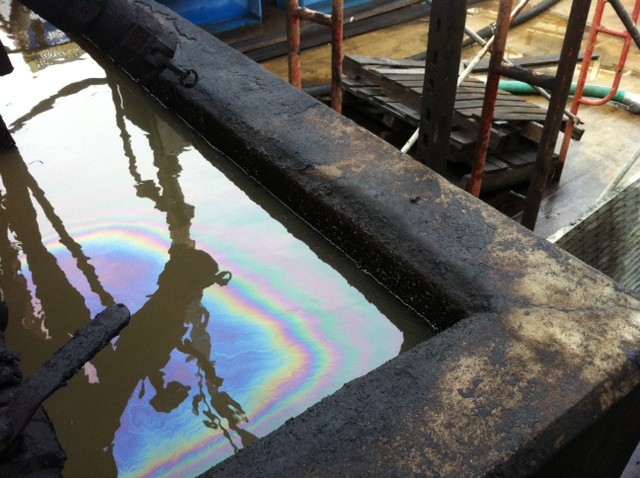 The 17-acre U.S. Oil Recovery site in East Houston (technically in the town of Pasadena)  has been a federal Superfund waste cleanup site since 2011.

In 2009, local investigators discovered that U.S Oil Recovery company had been leaking the various hazardous chemicals it collected from industrial clients into the air and local bayou, a regular fishing location which connects to Houston's main shipping channel. Texas prosecutors stuck the company's owner with five criminal felonies.

Of the dozens of chemicals the company accepted, and consequently released into the air and water: Benzene (a toxin known to cause cancer), mercury, arsenic, and acetone (the flammable chemical found in nail polish remover).

By now, these chemicals have largely been contained and removed by the the PRP Group, a contractor working for the U.S. Environmental Protection Agency, but some of the toxins still remain onsite, held in giant concrete tanks until the feds can haul them away.

According to an investigation by the Associate Press, the PRP Group reported that three of these massive tanks were flooded by Harvey's rains, and released an unknown chemical into the soil and into the nearby Vince Bayou. The EPA has yet to "publicly acknowledge" the existence of these three spills, let alone share what kind of chemicals its released, the AP reports. Officials told reporters that they're still "assessing the scene."

This isn't the only hazardous waste site hit by Harvey. Shortly after the hurricane's rains hit Houston, the AP reported that seven other Superfund sites in the area were underwater. The EPA has since announced that 13 of the 41 Superfund sites in Texas were flooded by Harvey.