Since its inception in 1891, it has served as a gymnasium, a USO office and a storage facility for the U.S. Postal Service.

But the building at 411 Bonham Street is probably best known as one of San Antonio's oldest gay and lesbian social hotspots.

Inspired by Alamo Hero James Bonham, the Bonham Exchange opened its doors in July 1981 after local development visionary Arthur "Hap" Veltman bought the building after the sale of his previous club, the San Antonio Country.

On December 3, 1988, less than a decade after opening the Bonham, Veltman lost his battle with HIV/AIDS. His vision for the club, however, continued to thrive. The club's ownership transferred to Veltman's partner, Kenneth Garrett, who still owns the club today.

In its 34 years, the Bonham Exchange has played host to some of the hottest names in music. Mega celebrities like Tina Turner, the Ramones, Iggy Pop, Deborah Harry, Martha Wash, Taylor Dane and RuPaul have drawn crowds of straight, gay, lesbian and trans folk to the three-story brick façade and its internal historic walls.

These days, headliners and pop starts have been replaced by the typical nightly bar shtick — recurring gimmicks meant to boost sales. On Wednesdays, there is karaoke. Thursday nights are reserved for a lip sync battle that offers the winner a $100 prize. Male guests can show off their pecs on Fridays for a chance to win some money. On Saturdays, 94.1 KTFM broadcasts live from the Bonham all night. And on Sundays, Natasha Von York hosts the Sassy Show (a drag revue).

Despite its history as a juggernaut, some say a combination of factors seem to have gradually begun to rob the institution of its pull within the LGBT community. In fact, many now see the Bonham Exchange as antiquated and refer to it (with implied disdain) as a straight bar.

Area actor, singer and poet Dino Foxx, who performs as Foxxy Blue Orchid (a fabulous bearded drag queen and burlesque performer), cites the opening of newer, more exciting bars like Sparky's Pub as one of the reasons the local LGBT crowd remains on the Strip.

"I think it would take something really major to have hundreds of people flock to the Bonham again and be willing to deal with parking, the smell that hits you when you walk in the door and drinking from plastic cups like you were in college on spring break again," Foxx told the San Antonio Current. 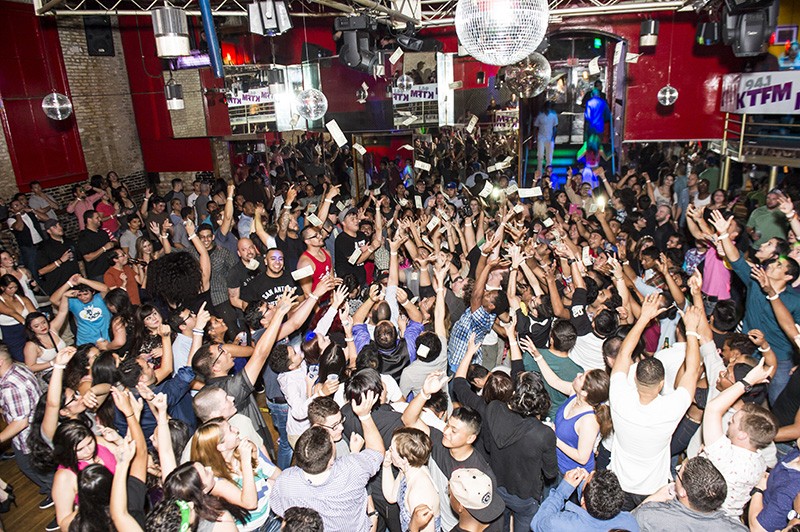 Erick Larue, a trans man and former Master Male Illusionist winner, says he hasn't been to the Bonham in nearly a decade.

"I didn't like the management and their lack of judgment with patrons," Larue said.

The daily $2 and $3 drink specials and a $200 VIP gold card that allows up to four people over the age of 21 to skip the proverbial velvet rope without paying cover for over a year no longer seem to catch the attention of would-be patrons.

Jeannette Mann-Chavez, a straight mother of two, calls her last visit to the Bonham in 1993 "raunchy and ridiculous."

"It became more of a straight bar than anything else. 'Straight nights' had tasteless contests ... More like who showed more 'TNA.' If I wanted to see that, I could have gone to a strip club. It simply lost what it once was ... the sparkle was gone," Mann-Chavez lamented.

According to Bonham Exchange General Manager "Niecy," (who asked to be referred to only as such), she isn't sure where this public perception has come from.

As far as she sees it, the joint has stuck to its roots.

"The Bonham is and always has been a gay nightclub," she told the Current, affirming that the bar has always been "gay owned and operated."

Niecy went on to explain that there are no set gay or straight nights at the Bonham Exchange and that patrons can still expect a mixture of people of all orientations.

Its Facebook and Yelp pages are not short of reviews and contrary to popular belief, there are literally hundreds of four- and five-star reviews (far outnumbering the lower rank reviews).

The general consensus of the 1,958 reviews on both sites seems to be that those who frequented the Bonham in decades past feel the bar has atrophied, while millennials and 20-somethings experiencing the club for the first time find the dance music and drink prices enticing enough to return.

While the Bonham is not ready to announce its plans for its 34th anniversary celebration later this summer, it does plan to celebrate Pride as it always has. The bar will once again host the annual Pride Pageant and participate in the Pride Bigger than Texas event on July 4th at Crockett Park.

Still going, but has its clientele shifted significantly over the years? The venerable Bonham Exchange faces criticism of no longer being a bona fide gay club.