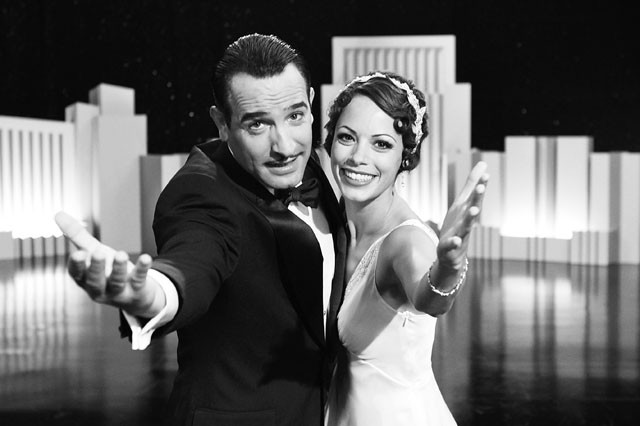 Disturbed that their marriage is falling apart, Doris Valentin (Penelope Ann Miller) says to her husband, “We have to talk, George.” However, George (Jean Dujardin) cannot talk, not merely because he is a defective spouse or even because he is a star of the silent screen; George does not speak to Doris, or anyone else, because he lives within a zestfully endearing silent movie. It is called The Artist, and it is the movie we are watching. Within that movie, Doris’ words are conveyed not through sound but through intertitles. Filmed in black and white with vibrant musical accompaniment, The Artist makes frequent use of irises, wipes, and other devices common in the era before Al Jolson’s jazz singer faced the camera and, in a voice that could be heard, declared: “You ain’t heard nothin’ yet.” Despite strategically positioned ambient noises and two significant words uttered at the melodrama’s end, writer-director Michel Hazanavicius has propelled himself into the company of D.W. Griffith, F. W. Murnau, and Sergei Eisenstein, masters of a medium that communicated exclusively and eloquently through images. He provides a refreshing counterpoint to all those noisy Hollywood blockbusters that aim for a perfect symbiosis of decibels and dollars.

The Artist is not just an anachronistic stunt, like composing a sonata for clavichord or a pastoral elegy in Latin. Obsolescence is one of its central themes, as timely today — with rotary phones, typewriters, and VCRs morphed into museum pieces — as during the years 1927-32 when the story is set. “Out with the old, in with the new,” proclaims Peppy Miller (Bérénice Bejo), the vivacious young starlet whose career, in an echo of A Star Is Born, is ascending while George Valentin, once the biggest box-office draw for Kinograph Studios, descends into obscurity, poverty, and madness. George is the eponymous artist of the film’s title, and when talkies put him out of work he refuses to pander to popular hunger for the latest technological gimmick. He sets out to prove that a moving picture is worth a thousand hobbled words. He writes, produces, directs, and stars in Tears of Love, a silent film that ends with an image of George vanishing into quicksand. Like the stock market crash that occurs shortly before its opening, George’s project is a disaster, but Hazanavicius’s film is love at first sight — Peppy and George instantly fall for each other, and the viewer is hooked upon watching The Artist’s opening sequence.

In the first frames of the film, a symphony orchestra accompanies the gala debut of A Russian Affair, George’s latest hit. Coming out from behind the screen to take his bows, George becomes so absorbed in hamming it up for his adoring audience that he neglects to give his furious co-star a chance to share the glory. A few minutes later in the street outside, a beautiful fan falls out of the crowd and into his life. She will call herself Peppy and soon becomes a star herself. If these details remind you of how Gene Kelly upstages Jean Hagen and then blunders into an acquaintance with Debbie Reynolds, the resemblance to Singin’ in the Rain (the classic musical about the transition from silents to talkies) is surely intended. The Artist evokes not only Singin’ in the Rain and A Star Is Born but also, in its portrait of a delusional, superannuated silent star, Sunset Boulevard. Moreover, a shadowy room in a mansion in which the worldly possessions of a fallen potentate are covered with sheets echoes Citizen Kane; a tender scene in which Peppy caresses George’s empty coat is vintage Chaplin; a tap-dancing performance by George and Peppy recall Fred and Ginger, and Jack — George’s bright and faithful Jack Russell terrier — is akin to Rin Tin Tin. The Artist is a love story — not only of George for Peppy and Peppy for George, but also of Hazanavicius for the magic of cinema. Anyone who bothers to see The Artist likely already shares that love, and will exit the theater even more smitten.

Because they did not have to worry about dubbing or subtitling dialogue, silents were global before globalization became a cliché. A French-Belgian co-production whose director and leading actors are French (though born in Buenos Aires, Argentina, Bejo grew up in France) but whose supporting cast includes Americans John Goodman, James Cromwell, and Penelope Ann Miller, The Artist is portable across national and linguistic boundaries. From its giddy initial film-within-a-film to its ambiguous, haunting conclusion, its faces and gestures say all that needs to be said. •