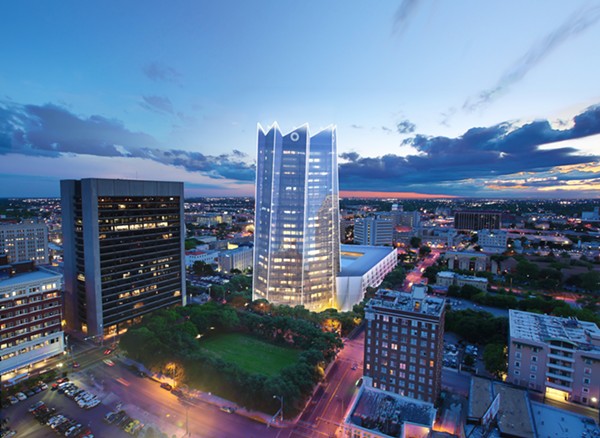 The criticism came as the design team for Weston Urban, a developer the city has handed some $1 million in fee waivers for the project, gave commission members their first look at the design concept for the new Frost Bank Tower, which would be the first major change to the city's skyline in 27 years. After about an hour of grilling representatives from Alamo Architects and the firm Pelli Clarke Pelli, which created the current design, the commission signed off on plans for the new tower, but not without stipulations. This is the first regulatory hurdle the 23-story building has had to pass since City Council approved the project last June.

During the meeting, Connor wondered whether the tower would be tall enough to be the city's newest, iconic skyscraper. Sure there's financial risk in building as high as possible, Connor said, but this is an opportunity to forever change the city's skyline. "And with that right comes responsibility. It could be better if it was a little bit taller," Connor said. William Butler, of the Pelli Clarke Pelli firm, had told the HDRC during his presentation that the height of the building reflects economic realities.

The HDRC also criticized the base of the 400-foot tower that will be at the corner of Houston and Flores Streets. According to the HDRC, the base could be better for pedestrians in the area. The commission felt the same way about the Camaron Street side of the building, which is right next to the massive San Pedro Creek renovation project. The HDRC also didn't like the parking garage design, which wasn't hidden by any design elements. Alamo Architects and Pellie Clarke Pelli will have to appear before the HDRC again as designs for the Frost Bank Tower continue to develop. Construction on the new building is supposed to start this winter and be completed by 2018.

The new skyscraper is part of a public-private partnership City Council approved last year that included spending $51 million to buy the old 22-story Frost Bank Tower at 100 W. Houston Street, where a currently scattered city staff will consolidate. That building is a $6.7 million fixer-upper as half the building needs to be renovated.