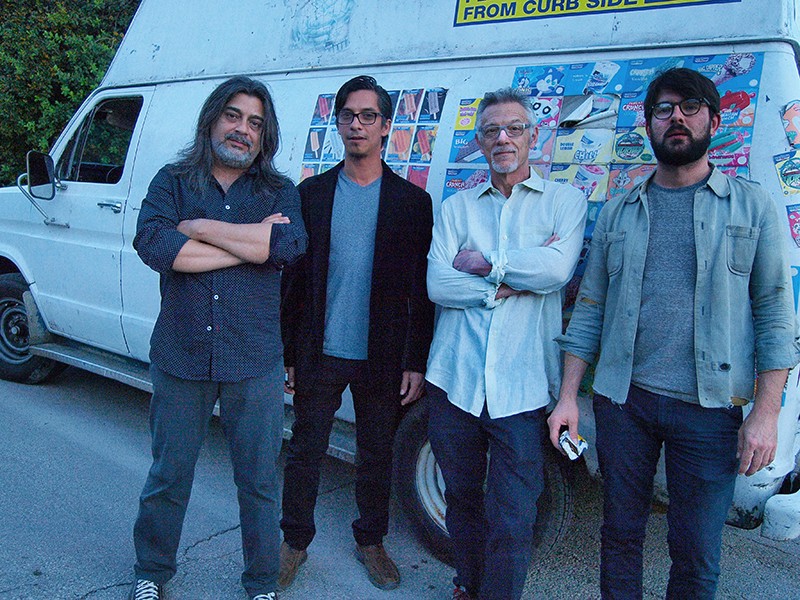 "Bullets for Breakfast!" screams the band, roughly in sync, as if drinking into the morning and agreeing on a lead brunch is something to cozy up with.

It's the first thing we hear on Royal Punisher's first record, Bullets for Breakfast, a long awaited, all-original document of one of SA's favorite jazz bands (cleaning up the San Antonio Music Awards since 2011).

The next thing we hear is a fat solo from drummer Kory Cook, pounding at his snare in knockout, Tyson-grade combos. Only then do we get the head of the tune — the dog-eared melody that grounds a traditional jazz composition. In form and in style, Royal Punisher works to upend the polite jazz regimen of head-solo-head and fakebook reliance of a lab band, pissing off a traditionalist or two along the way.

"I think Royal Punisher is a pseudo-jazz group, somewhat created for people who may or may not like jazz, people who prefer rock 'n' roll," Cook said. "Jazz pursuits that come see us may not like it. We don't strive for perfection as a group. We don't strive for nailing charts. It's more about picking up the pieces of everything we've created as individuals and coming together and trying something new every time we play."

On Bullets for Breakfast, that equates to a brawling crew of rock 'n' roll dudes bringing a leather jacket energy to jazz (or reviving the bad boy attitude of the bop musicians, sans heroin). An acolyte of Ornette Coleman, saxophonist Estevan Garcia flies above the band, releasing hawkish, piercing bursts of alto. On guitar, Don Robbin pops in with unexpected chordal jabs, opening up with mean bursts of Santana-like guitar in solo sections.

Cook throws haymakers into the rhythm, keeping the band on its toes at each turn. As a result, bassist Phil Luna becomes the timekeeper, franticly pushing the tempo and pointing at his pocket watch with the jitters of Lewis Carroll's White Rabbit.

"We're all alpha players, so we turn our shit on and play all the notes," said Luna.

"The other guys, they don't think about much. If you listen to the album, there's four things going on at once. It makes a lot of neat chaos," he added.