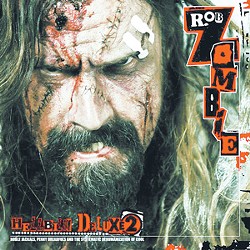 
Sequels are generally inferior to the original, and it’s no exception with Rob Zombie’s follow-up — a dozen years and two albums later — to his breakthrough solo disc. That said, Zombie stays consistent in his role as psychobilly’s Marilyn Manson. His amped-up, industrial, B-movie rave-ups offer chunky, childish frills as they race their V8 roar from “Virgin Witch” to “Werewolf Women of the SS.” If the formula’s predictable, it still packs a punch, even as the energy flags noticeably during the album’s last half. The single “Sick Bubble-Gum” attempts to be a mf-bomb-dropping latter-day “Dragula,” but it’s not the album’s best moment, as it settles too deeply into its tight-grooved rut to generate enough propulsion.

The real highlight is “What?,” whose organ-driven strut lands it among Zombie’s best post-White Zombie tracks, with a goofy chorus delivered like a demented circus barker: “Vampire lovers and wild bikini sex/ Cannibal men and jungle girls.” “Mars Needs Women” opens with an intriguing, spooky, acoustic-guitar-driven intro before settling into by-the-numbers throb. That’s the problem in a nutshell. Still capable of ear-catching music, Zombie is too satisfied with making the easy move. Glimpses of brilliance peek through, but they’re drowned in forgettable fodder with little appeal beyond his dedicated fan base. — Chris Parker